Walpole, Vampires, and the Undead

Venture into the origins of vampire novels in this lecture from our series on Horace Walpole and his Legacies. Join the conversation via #WalpoleLegacies.

Vampires, as we understand them today, were first discovered in the early eighteenth century when a series of mysterious cases on the borders of the Austro-Hungarian Empire were investigated by Viennese officials. The ensuing reports spread across Europe like wildfire and provoked serious international debates in medical science, theology, and philosophy. In England, meanwhile, the figure of the vampire was seized upon by the press as a prescient political symbol. Although it was to be more than a century and a half before Bram Stoker wrote Dracula, the undead were already haunting the imagination – not least in Horace Walpole’s pioneering Gothic novel The Castle of Otranto, first published in 1764. This lecture explains the influence of the vampire debates on Walpole’s work, analyzes the appearance of the undead in his novel, and describes the influence of Otranto on later vampire fiction. 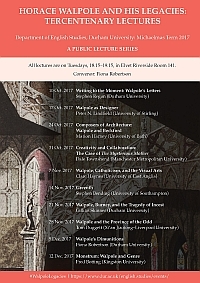