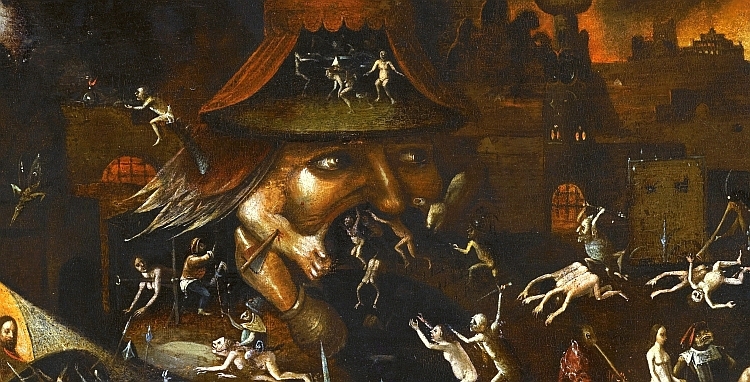 The Harrowing of Hell and Peregrini

A unique opportunity to see a production of possibly the oldest play in Britain, the Lindisfarne Harrowing of Hell, alongside another play written in the North East, Peregrini.

The Harrowing of Hell

According to orthodox Christian belief, the fall of Adam and Eve from Paradise placed all humanity in the power of the devil until Christ redeemed those who accepted the faith by his death on the Cross. But what about those who had lived and died before Christ’s incarnation? This led to the legend, first found in the apocryphal Gospel of Nicodemus, that between his death on the Cross and his resurrection, Christ went to Hell, overthrew the devil, released the ancient righteous along with Adam and Eve, and led them to heaven. This is the subject of the fragmentary Latin Harrowing of Hell, found in the ninth-century Book of Cerne but possibly derived from eighth-century Lindisfarne, which has a good claim to the title of the earliest dramatic work from the British Isles. It breaks off early in Eve’s appeal to Christ, but an Old English version of it, recast into sermon form, survives in the tenth-century Blickling Homilies, where it is preceded by a scene in which the lesser devils blame Satan for bringing Christ to Hell and allowing him to defeat them. Our version, which will be performed in modern English, includes both scenes and links them with a ninth-century ceremony for the dedication of a church in which the bishop sings Christ’s words in the Gospel of Nicodemus derived from Psalm 24: Atollite portas principes vestras, et elevamini, portae eternales, et introibit rex gloriae ‘Lift up your gates, you princes, and be lifted up, you eternal doors, and the King of Glory will come in’, to which a priest inside the church responded with Satan’s Quis est iste rex gloriae ‘Who is that King of Glory?’ and received the reply Dominus virtutum, ipse est rex gloriae ‘ The Lord of Hosts, he is the King of Glory’. ‘Satan’ then fled from the church back to Hell.

Luke and Cleophas, two pilgrims returning from Jerusalem, are mournfully discussing the recent execution of Jesus, who they had hoped would be the Messiah; they have heard a rumour that he has risen from the dead, but they don’t believe it (although Luke wants to). A stranger meets them on the road, asks why they are so sorrowful and explains to them the Old Testament prophecies of the birth, death and resurrection of the Saviour. Reaching Emmaus, they compel him to stay and share a meal with them; as he invokes a blessing on their food, Luke suddenly recognises him as Jesus – but he has vanished. At once they set off to return to Jerusalem. Meanwhile, Jesus’s disciples are discussing whether or not to believe Mary Magdalen’s claim to have met the risen Jesus. Suddenly, Peter bursts in with the news that he has just seen Jesus, closely followed by Cleophas and Luke, who bear a similar message. Andrew and James are rejoicing over the rise of a new ‘sun’ (Jesus) when the sceptical Thomas appears. He refuses to believe in the resurrection unless he can place his fingers in Jesus’s wounded hands and side. He persists in his scepticism despite anything the disciples can say until Jesus appears and invites him to touch his wounds; Thomas acknowledges the risen Jesus, and the play ends with a triumphal hymn about the resurrection.

This play will be sung in Latin, although a parallel translation will be available. Because it is preserved in a collection of Lawrence’s poetry rather than a liturgical manuscript, its original music does not survive, but is here reconstructed from music in manuscripts which were in Durham in his time and which he must have known.

A combined ticket for The Harrowing of Hell and Peregrini costs £5.00, payable on the door or purchasable in advance from Durham World Heritage Site Visitor Centre (for delegates to the SITM conference on 8th July, this cost is included in conference fee).