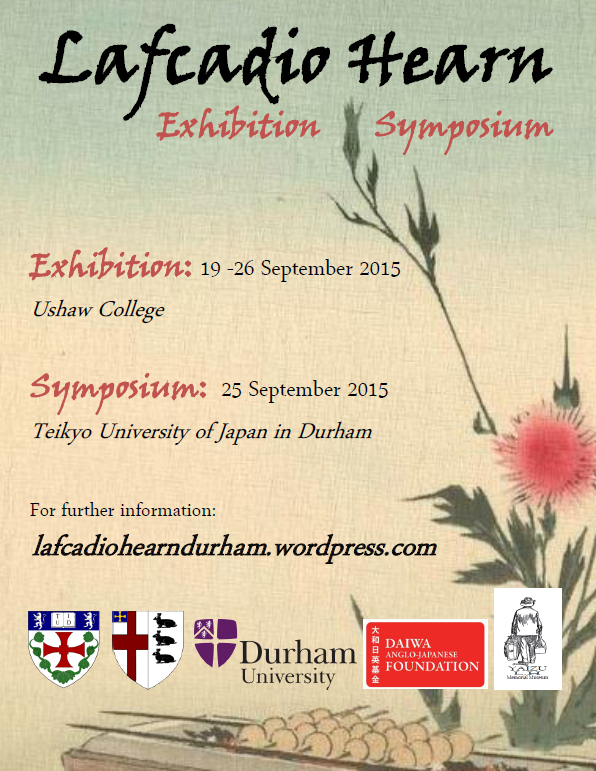 A one-day symposium celebrating the work and writing of this literary genius and traveller. An complementary exhibition about Lafcadio Hearn will be running from 19th to 26th September at Ushaw College.

Lafcadio Hearn, known in Japan as Koizumi Yakumo, was born in 1850 on the Greek island of Levkás. He grew up in Dublin and was educated at Ushaw College, Durham, where his name appears in college records as Patrick Hearn. He left Ireland for the United States at the age of 19, settling in Cincinnati and working at various menial jobs and then on the Trade List, before joining The Cincinnati Enquirer as a reporter. While in Cincinnati he translated stories by Théophile and Gustave Flaubert. In 1877, he moved on to New Orleans, and from 1887 to 1889 he was in the West Indies on assignment for Harper’s Magazine, which resulted in Two Years in the French West Indies(1890) and a novel Youma (1890), dealing with the insurrection against slavery. In 1890 Hearn traveled to Japan for Harper’s. He eventually gave up his work with the magazine and worked as a schoolteacher in Izumo in south-western Japan. There he met and married Koizumi Setsu. In 1895 he became a Japanese subject, taking the name Koizumi Yakumo, Koizumi being his wife’s family name.

His articles on Japan were published in The Atlantic Monthly and in several newspapers in the United States. These essays and others were collected and published asGlimpses of Unfamiliar Japan (1894). From 1896 to 1903, Hearn was Professor of English Literature at the Imperial University of Tokyo. Four books written at this time reflect his deep interest in the literature and culture of Japan: Exotics and Retrospective (1898), In Ghostly Japan (1899), Shadowings (1900), and A Japanese Miscellany (1901). Kwaidan(1904), published the year he died, includes Hearn’s stories of the supernatural.