William Wordsworth and James Joyce are not literary names who are generally thought of together, but this Late Summer Lecture will show how they are connected through their representation of consciousness. Free and open to the public.

The paper examines the development of the stream of consciousness as an intermedial literary technique in The Prelude. Wordsworth's visualisation of memory within the 'spots of time' emphasises memory as 'spectacle', appropriating techniques and effects derived from pre-filmic, public visual entertainments, namely the panorama. Wordsworth adapts the sensation of virtual space and time travel achieved by technical illusions of the panorama into a psychological phenomenon that is realised by memory. In doing so, Wordsworth anticipates modern concepts of mental time travel, which build on notions of the stream of consciousness in addressing our ability to mentally project ourselves backwards in time to relive past experiences. His literary visualisation of memory also demonstrates affinities with photography and cinema proper, despite The Prelude predating these technologies. The paper argues that Wordsworth's method acts as a foundational model for later nineteenth and twentieth century treatments of subjectivity, memory, vision, and temporality, thus anticipating Joyce's intermedial techniques. In Portrait and Ulysses, Joyce also demonstrates practice of mental time travel, in relation to the temporality of the stream of consciousness.

Adam James Cuthbert is a PhD English student at the University of Dundee, specialising on the stream of consciousness in the works of William Wordsworth, Charles Dickens, and James Joyce. He is the current AHRI Doctoral Fellow for the Centre of Critical and Creative Cultures at Dundee, and the PG Representative for the Scottish Network of Modernist Studies. He was awarded a scholarship to attend the 26th International James Joyce Symposium (June 2018) at the University of Antwerp, where he presented on the stream of consciousness and the 'camera-eye' in the works of Joyce and Thomas Wolfe. 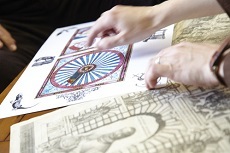