The CDT has organised and taken part in various public engagement activties. These are some examples.

Energy CDT students ran an event on "Introduction to Induction" at the 2019 Schools Science Festival.

Members of the Energy CDT participated in the "Wind in your sails" event at Beamish Museum in July 2018. The event explored the science and engineering of the North East of England though a range of hands on activties.

A group of Energy CDT students ran an event at the 2017 Schools Science Festival in March 2017.

Energy CDT students participated in an event at the 2015 British Science Festival in Bradford.

The UK is facing an energy crisis. How we can ensure we have secure, sustainable and affordable energy supplies whilst also reducing greenhouse gas emissions? Durham University energy experts discussed the challenges and scientific innovations driving our energy future.

The event at the British Science Festival 2015 considered the pressing challenges and questions about the nation's future energy supply and asked: Are we facing a dark and cold future or do we have viable options for securing our energy future?

On 21st August 2014, research students from the Durham Energy Institute’s Centre for Doctoral Training (CDT) in energy hosted an evening debate on the future of energy policy in the UK, open to pthe general public. The event, chaired by Professor Jon Gluyas, saw robust exchanges between representatives of 5 of the largest UK political parties; James Wharton MP from the Conservative Party; Liam Carr from the Labour Party; Cllr Wendy Taylor from the Liberal Democrats; Jonathan Arnott from UKIP; and Jonathan Elmer from the Green Party. The event itself was an overriding success, with over 180 people in attendance from a cross-section of local and national industry, academia and pressure groups.

Before the debate, audience members were asked to vote down an energy technology in a “reject a tech” ballot. In this, coal and fracked gas were overwhelmingly rejected as future energy sources. Some discontent was expressed towards nuclear and renewables, but this was minor in comparison to the strong opposition to fossil fuel.

The debate provided members of the public an opportunity to directly quiz panelists with questions focussing on energy efficiency, fracking, energy bills and renewables policy. There was even a moment of unanimity and harmony amongst the panellists in agreeing the need to improve energy efficiency of our homes. However, political points were also made with Labour and the Conservatives clashing on energy prize freezes and the record of the current coalition Government and the previous Labour regime.

After the debate, the public were asked to vote on the party which they felt best represented their “energy future”. In contrast to national electoral ballots, the Green Party were chosen by the public with the Conservative Party in second place. Will this trend affect parliamentary election results in 2015? The DEI and CDT look forward to hosting similar events in the future to begin to answer that very question.

If you missed the event you can now read the review, watch the video, and listen to the BBC radio interviews of the event on www.dur.ac.uk/dei/events/past.events/electenergy/. 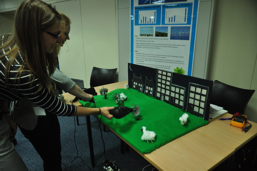 The CDT PhD students ran an interactive energy based activity for GCSE level students at the 2013 British Science Festival in Newcastle. The session aimed to increase the students’ awareness of the growing energy gap within the UK, highlighting the challenges faced by today’s government and society.

The task was introduced by setting a scene of impending doom; the UK is importing more fuel from foreign sources than ever before in order to cover the gap caused by the decrease in UK indigenous resources. To reduce this gap, the students were split into groups and given £300m to invest in energy resources. They become the Energy Dragons. Each group visited five energy stalls run by CDT students, each vying for their investment. Nuclear energy, wind energy, geothermal energy, Carbon Capture and Storage (CCS) and biofuels formed the five resources available for investment. The groups’ aim was to invest their money such that the annual energy consumption of Newcastle-Upon-Tyne (6000 GWh) could be covered, whilst trying to keep CO2 emissions as low as possible. The Energy Dragons were encouraged to question the stallholders about the pros and cons of each energy resource in order to determine if they wanted to invest in it.

After viewing each energy stall, Energy Dragons discussed how they’d like to invest their money. They were encouraged to think not only about making the numbers work to solve Newcastle’s energy problem, but to also understand the short and long term investment of their money. he final results showed the Energy Dragons had understood the need to spread their investment widely across all resources, thus achieving the goal of the CDT group. 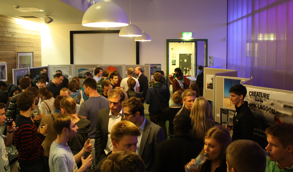 The CDT organised the Durham Energy Futures Film Festival (DEFFF) in 2012. The event took place in the Tyneside Cinema in Newcastle. There was a photo competition, a drinks reception and a screening of energy related short films. Finally there was a question and answer panel with some of the film makers, and a talk from Professor Phil Taylor.

The photo and film competition was entered by students from accross the Network of Energy CDTs.

The event was free and attended by a mixture of students, academics and members of the public. The film competition was judged by a group of sixth form students from Yarm School.

You can find all the film entries on the Durham CDT YouTube channel.

CDT PhD student Ben Hedley, with assistance from fellow CDT students, organised a public debate on carbon capture and storage (CCS). The debate was organised in partnership with the Centre for Life in Newcastle and was part of Newcastle ScienceFest.
A panel of experts at Newcastle Centre for Life discussed the pros and cons of CCS in the style of a Question Time debate.The panel consisted of:
The event was attended by students, academics, industry and other members of the public.
Global CCS Blog Article on the event 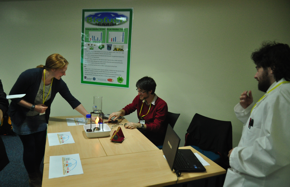 The CDT are always happy to hear from schools who are interested in the CDT coming to teach a lesson. Please do get in touch to find out if we can organise something.