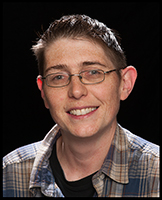 I am a full time PhD student, coming back into study after working for the past 15 years as the curator of the large and significant archaeological collections of Lincolnshire County Council, including management of the excavation archives from the Roman Colonia at Lincoln. During this time, I also spent a year as the Regional Collections Development Officer for Renaissance East Midlands, based at Derby Museum and Art Gallery. I have been heavily involved in both preserving and promoting Lincolnshire’s archaeology, and served as the chair of the Archaeology Committee of the Society for Lincolnshire History and Archaeology for 6 years.

I am a Visiting Tutor at Bishop Grosseteste University in Lincoln, devising and teaching an undergraduate module on the Archaeology of Roman Britain. My research interests include religion and religious identity in Roman Britain, public engagement with museum interpretation, and the management of archaeological collections in museums.

Gods behind glass: the interpretation of Romano-British religious practice and identity in British museums

Post-colonial archaeologies portray an increasingly complex picture of life in Roman Britain. Religious practice, an important aspect of Romano-British culture, resonates in public perceptions of the period and features almost universally in museum displays. Museums are important instruments for the dissemination of archaeological theory, but are British museum displays reflecting modern scholarship in presenting a nuanced narrative of cultural and religious hybridity, or continuing to perpetuate outdated culture-historical models of thinking about Roman Britain? Romano-British archaeology has not, to date, been sufficiently engaged with either the decolonization movement within museums or multidisciplinary scholarship into the interpretation of material religion.

My research is based upon a hypothesis that museums generally display religious material through an archaeological mode rather than as representative of lived belief. This manifests as presenting Romano-British religion as a category distinct from other aspects of daily life; focussed on the worship of named anthropomorphic deities in specific places of worship; predicated on the existence of a homogenous religious ‘system’ with a harmonious ‘melting pot’ of native, imported and syncretised deities; and remaining chronologically static except for an abrupt 4th Century transition from paganism to Christian monotheism. All of these have been challenged by scholarship in recent decades.

Through systematic analyses of display construction and the use of language and terminology in interpretation, supported by curatorial and wider stakeholder interviews, my research will investigate the public presentation of Romano-British religion across a representative selection of British museums. Utilising the Lived Ancient Religion approach and comparative studies of contemporary religion in museums, with a specific focus on recent phenomenological scholarship into ancient religion, I will explore the potential for museums to adopt new display paradigms, based on individual lived religious experience rather than more traditional artefact-led approaches.

Associate of the Chartered Institute for Archaeology

Associate of the Museums Association

Fellow of the Royal Numismatic Society

Society for the Promotion for Roman Studies

Society for Lincolnshire History and Archaeology

2015. 'Of considerable distinction and elegance': A newly discovered antiquarian illustration of a Roman tessellated pavement at Scampton villa. Lincolnshire Past and Present, Vol 100. Society for Lincolnshire History and Archaeology

2006: ‘The Collection: Bringing History back to Lincolnshire’. Society of Museum Archaeologists Conference; The Collection, Lincoln;

2019: Theoretical Roman Archaeology Conference - ‘Whose history is this? Multivocal narratives of Roman archaeology’ (with Karl Goodwin, University of Kent)

36 hour annual module on the Archaeology of Roman Britain