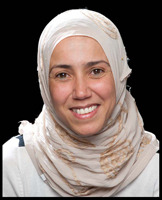 I am looking at the transformation of settlement and economy in Cyrenaica from the 7th to the 10/12th c., a period which spans from the Late Byzantine era into the first centuries of the Arab occupation.

This research is important as no synthetic work on the Islamic occupation of Cyrenaica has ever been carried out while the Libyan government has never had a complete catalogue of all the archaeological sites and monuments in the landscape. My research aims to fill this gap by looking at the continuity and change of Cyrenaica immediately before and after the Arab conquest. The chronological range chosen for this research finds its justification in the historical development of the Arab state. Most of the Roman cities in North Africa continued to be inhabited until the 9th and the 10th c. and it is only from this moment that a new social and territorial organization will take place. The project will investigate four core research questions:

2. How far settlements were changed by the Arab presence? And how did the settlement organization change from the conquest into the 9th/10-12th c.?

3. Did the Arab conquest have a disruptive impact on the life of the inhabitants of the region?

4. How did economy change? What trade routes continued to be in use and which ones were abandoned?

5. How did the Arab conquest impact on the Christian presence?