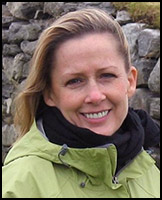 When I was an undergrad and wished to switch my major to archaeology, my parents insisted that I complete my degree in Music Education, after which they would be willing to fund a graduate degree in Business at the University of Texas. If I wanted to instead pursue archaeology, I was on my own. After completing my MBA, I moved from Texas to New York City to work for Lehman Brothers on Wall Street. A few years later, I went on holiday in Greece where I met an archaeologist from Athens who invited me to join her on a private tour of the Akrotiri excavation, led by Christos Doumas. It was an impressionable experience that only deepened my desire to ultimately study and work in archaeology. Although it was many years later in 2010, I was finally able to start taking undergraduate archaeological classes at Columbia University while still working in business full time. In 2012, I entered the Archaeology program at Columbia as a full-time graduate student and a few years later, completed my degree with a Master of Arts in Anthropology (emphasis in Archaeology).

When I began this journey, I had initially intended to study the Etruscans after which I would seek employment with a museum in New York City. However, during my matriculation at Columbia, my archaeological perspectives became increasingly influenced by the works of Paul Pettitt, Mike Parker-Pearson and Zoe Crossland with respect to mortuary practices. Paul Pettitt’s book The Palaeolithic Origins of Death and Burial literally changed my life, and I switched my focus to the Middle Palaeolithic. Following graduation, I realized how much I wanted to continue my studies in the Palaeolithic under the guidance of both Paul Pettitt and Mark White, and accordingly - I entered the PhD program at Durham University.

The Trajectory and Thresholds of Hominin Cognitive Development

Although I remain deeply interested in Middle Palaeolithic mortuary practices, I felt it crucial to research cognitive development in the human lineage long before mortuary practices began (or so we think) in order to better gauge how and when our various cognitive abilities developed, as well as provide a supporting history of our cognitive thresholds. My research relies heavily on two sources of information: the scientific evidence provided by brain endocasts (moulds of the brain taken from fossil crania) and the behavioural evidence observed in the archaeological record, with a focus on the making and use of stone tools. As a result, my time frame of study has pushed back further than I originally intended to the Australopithecines, the first uncontested hominins (and thus ancestors of the human lineage) as well as the first makers of stone tools. The timeline will extend at least through mid Homo erectus and possibly as late as Homo heidelbergensis. The integration of these two sources will be examined through the lens of modern neural science. Did the physical and cognitive changes that evolved in the brain enable the advancement of certain hominin behaviour? Or was it behavioural adaptation/adoption that served as the underpinning drivers for the evolution of the brain? The foundation for my work is based on recent breakthroughs in modern medicine that have provided a more detailed understanding of the inner workings of the cerebral cortex, which have, in turn, shed new light on the possible reorganization of the brain during the late Pliocene.

The Etruscan Necropolis of San Cerbone: May-June 2013 and May-June 2012; Populonia, Italy
Site Description:  New excavation led by Megale and Genovesi located within the Archaeological Park of Baratti & Populonia, occupied between 7th and 4th century BCE.
• In 2013 worked as staff, supervising the Earth Watch Volunteers and acting as translator
• Excavated three burials (including human remains) in 2012 and a tumulus tomb in 2013
• Washed, cleaned, identified, labelled and catalogued pottery and other artefacts
• Total Station, mapping and stratigraphy work

Pelham Bay Park Contemporary Archaeology Project: June-July 2015; Bronx, New York
Site Description: A encampment for the homeless during the 1980s. Project directed by Courtney Singleton, a PhD candidate at Columbia University whose work forces on contemporary issues – especially the plight and living conditions of the homeless. Mapped the entire site with Courtney via total station and performed surface collection prior to start of actual excavation. Very hot weather, with lots of bugs that sting/bite.

Craswell Crags and Anston sites: July 2016; Derbyshire/Nottinghamshire, England
Site Description:  Directed by Professors Paul Pettitt and Mark White. Craswell Crags is Scheduled Ancient Monument Site (archaeology) as well as a Site of Specific Scientific Interest (natural history). Anston is a nearby site that Professor White thought to be a good place to dig. Work included general excavation work in search of Palaeolithic stone tools. We did find some Roman pottery and the jaw of a pig.

Santon Downham: July 2017 and July 2018; Thetford Forest, England.
Site Description: Two Palaeolithic sites within walking distance from one another where we discovered evidence of stone tools and stone tool making. Work included planning and preparation for excavation, financial budget/accounting for excavation, general excavation work, and the supervision of the undergraduate students.