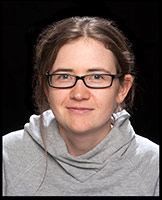 I am a Ph.D. candidate in dental anthropology and bioarchaeology, working with arctic hunter-gatherer dental and skeletal remains. I have a MSc Human Osteology and Palaeopathology from the University of Bradford and a B.A. Archaeology from Birkbeck, College, University of London. I am experienced in archaeological excavation and recording techniques, post-excavation procedures, and photography both during and post-excavation.

The Inuit are an extant population, extending over vast geographical and ecological regions, with an extended temporality. There are extensive ethnohistorical accounts of unaltered lifestyles since first contact. These ethnohistorical accounts show the variation of cultural habits (i.e. clothing), to subsistence strategies between Inuit populations. Also highlighted are the similarities, such as the use of teeth as third hands (paramasticatory activities) the resulting marks referred to as paramasticatory dental striae, with a divergence made between sexes.

As the dentition is apt for bioarchaeological analysis, and the Inuit partaking in paramasticatory activities, a study on Inuit dentition will reveal intra- and inter-population variations and population specific cultural habits.

The research questions are;

These research questions will help test the following hypotheses;

The aimed outcomes of the hypotheses are;

The research will incorporate adults, juveniles, and mixed dentitions individuals, to analysis the age paramasticatory activities and sex-based divisions begin, and if inter-population divergences are present. Alongside this, health will be gaged, to analysis sex-based access to resources and prevalence and distribution of physiological stresses. The data can be used for an in-depth analysis in the complexity in cultural divergences between Inuit populations.