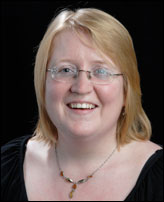 Research Associate in the Department of Archaeology

Following a degree in Archaeology and Anthropology at Cambridge, Beccy spent two years bitterly protesting that she had no intention of ever undertaking postgraduate study, whilst digging for contract units in Cambridgeshire, Kent, and (randomly) Libya. After two years, the cold and wet got all too much for her, and she left to take an MA at Durham. She has recently completed an AHRC-funded Ph.D at Durham on the Early Middle Palaeolithic of Britain, in the course of which she became an associate of the Leverhulme-funded Ancient Human Occupation of Britain Project (AHOB). She has lectured on undergraduate courses throughout her doctoral studies, and acts as a Palaeolithic consultant and lithic specialist (multi-period) for contract units. Beccy was made a full member of AHOB in October 2006, and is employed at Durham as a post-doctoral researcher in Palaeolithic Archaeology. She is particularly interested in the development of classic Neanderthal behaviours during the earlier Middle Palaeolithic (OIS9-6) and especially the organisation of technological behaviour in the landscape.