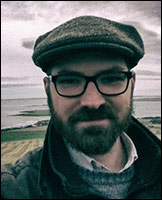 I am a part-time doctoral student researching the development of episcopal palaces in County Durham during the later medieval period.

I received my undergraduate from the College of the Holy Cross with a Double Major in History and Medieval Studies, before taking a MA in Medieval Studies at the University of York. After beginning a career in a classical archaeology museum, I completed a MA in Museum Studies at the University of Leicester. For over five years I was a curator at the Auckland Project. I am currently the Project Curator at Norwich Castle Museum and Art Gallery working on the Royal Palace Reborn project, refurbishing the Norman keep and creating a new medieval gallery.

My research revolves around the development of the episcopal complex Auckland Castle, the premier country residence of the Bishops of Durham, from the twelfth to the sixteenth century. Less constrained by the geographical restrictions faced by the see-seat of Durham Castle, Auckland was nearly continuously occupied throughout the later Middle Ages and received extensive architectural attention and development from the bishops. In the seventeenth century, however, extensive change occurred in conjunction with the English Civil War, altering and removing many of the medieval features. The most comprehensive history and review of the castle was published in the nineteenth century and did not incorporate archaeological evidence. Refurbishments of the castle under The Auckland Project, in conjunction with Durham University’s excavations, has revealed that the size of the complex and surviving remains are considerably more extensive than was previously understood. This presents an excellent opportunity for an overarching examination and appraisal of the site and its development during the medieval period.

My doctorate is centred on the on-going excavations and assessment of the standing structures of Auckland Castle in order to explore the different historical phases of construction across the site. This is undertaken in parallel with an investigation of documentary and art historical evidence to contextualise the social meaning and use of space within the episcopal complex by the prelates, their household, and the wider community. The chronological stages of the castle’s development are assessed in relation to the principal bishops who commissioned work on the palace in order to examine patron-initiated alterations as well as explore wider trends which may have influenced the choice and expression of architectural design. This holistic approach aims to improve the understanding of Auckland Castle’s evolution through the medieval period and contextualise the palace within the wider episcopal, architectural, and cultural landscape.

The Cottingham Font? An example of the 9th-10th century conversions in England? Presented at The Viking World Diversity and Change Conference, University of Nottingham, July 2016.

Ferrara, Andrew. (2013-4) ‘An Exploration of a Late Roman Leather Cuirass from Karanis, Egypt’ The Bulletin of The Association for Roman Archaeology 22, p. 42-50

Ferrara, Andrew. (2011) Karanis Revealed: Discovering the Past and Present of a Michigan Excavation in Egypt [Exhibition brochure] Ann Arbor: Kelsey Museum of Archaeology.