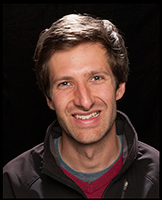 I am a part-time PhD student researching the Roman, post-Roman and Early Medieval period of County Durham.

I studied as an undergraduate and MA student at Durham, before moving into museum work. Alongside my PhD studies, I am curator of archaeology and social history at The Auckland Project. For this I co-ordinate archaeological work at Auckland Castle and Binchester Roman Fort, and my academic projects fit alongside this and Durham University’s excavations at Auckland Castle.

I have worked for several commercial archaeology units, as well as having been on and supervised research excavations, in the UK and other parts of north-west Europe – most regularly at Bamburgh Castle. My research interests are in landscape archaeology, the 1st millennium AD in Central Britain – particularly the transition from the Roman to early Medieval period, and in community involvement in archaeological fieldwork.

My research looks at the landscape surrounding Auckland Castle and Binchester Roman Fort, as well as the town of Bishop Auckland more widely, which has received relatively little archaeological study beyond these key sites. The landscape around the confluence of the River Gaunless and the River Wear is rich in archaeology, but has been largely undeveloped since the late seventeenth century, and therefore presents an excellent opportunity for research. Conversely, development of the town in the nineteenth and twentieth centuries has been extensive, but has yielded little archaeological understanding of the town before the medieval period. The main street, Newgate Street, is understood to have been part of the Roman route of Dere Street, while the northern end of the town around the market place has been heavily influenced by Auckland Castle.

Early documentary records refer to the historical landscape unit of Aucklandshire, but the archaeology of the early Medieval and Roman lands it incorporated remain little understood and the detail of the development of the northern end of Bishop Auckland, beyond Auckland Castle is comparatively unknown for these periods. My doctorate research will contextualise the Castle, Binchester and Bishop Auckland town within their cultural landscapes, using a combination of techniques to illuminate more of the development of the landscape of Aucklandshire in the first millennium AD, with a particular focus on how culture and identity have been enacted within the landscape.