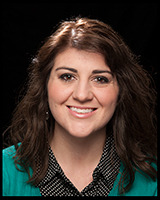 I graduated from the University of North Carolina at Wilmington in 2011 with a BA in Anthropology, focusing on Archaeology, and a minor degree in Religion. In September 2015, I completed my Master’s degree in the Archaeology Department at Durham University. I began my PhD at Durham in October 2015.

*Student affiliate of the Chartered Institute for Archaeology, Castle Studies Group, and Architectural and Archaeological Society of Durham and Northumberland.

*Assistant Secretary of the Architectural and Archaeological Society of Durham and Northumberland from May 2017-May 2020: organizer for monthly lecture series and co-organizer for excursions

*Volunteer at the World Heritage Visitor's Centre and Durham Castle

*Chair of the Durham Medieval Archaeologists from April 2016-May 2017

For centuries, castles have stood as romantic symbols of their former glory, serving as poignant recollections of the age of chivalry and courtly society. The subject of this PhD explores and assesses ways in which themes and ideals from medieval romance literature influenced the architecture and designs of late medieval English castles and elite manipulated landscapes. Romance had both direct and indirect influences on these elite architectural and landscape designs. Direct influence takes the form of characters, themes, and ideals from particular romances incorporated into designs. Indirect influence comes through ways in which romance literature inspired values of chivalry that affected medieval culture—the architectural face of which is the castle. This romantic influence takes many shapes and forms, such as in specific elements of architectural features, chosen locations of castles, naming of a castle or particular building within the castle complex, designs in microarchitecture, chivalric and romantic symbolism, and designed spaces in which to enact courtly activities. This research is interdisciplinary, rooted in buildings archaeology, incorporating research in medieval archaeology, literature, art, and history. My work is motivated by a strong desire to preserve historic buildings by encouraging public interest in this fascinating aspect of British heritage.

Organized two paper sessions and a round table session on the 2nd of July at the International Medieval Congress 2018:

Symbolism and Castles I: Designs of Innovation, Imagination, and Romance

Symbolism and Castles II: Landscapes of Chivalry and Romance

Symbolism and Castles III: Gender, Space, and Time-- A Round Table Discussion