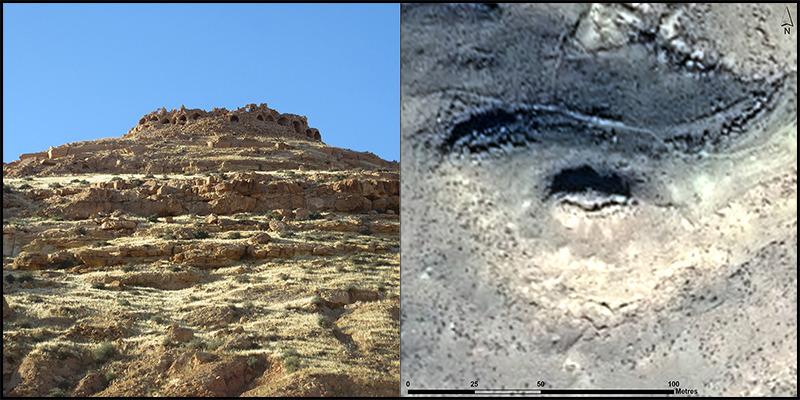 Fig 1: Large Islamic fortification with structures for storage situated on a hilltop north of the town of Haraba (Libya). The table illustrate the potential of remote sensing for site identification, by comparing a ground photo (on the left) to the satellite imagery (on the right) - 4-bands multi-spectral images Pleiades 2013 - 0.50m res.

The past and present political situation of Libya has left the country without a specific policy and programme for controlling and preserving ancient sites. These are under threat, for numerous reasons, for instance: destructions have been recently targeting religious buildings, as marabouts; quarrying activities are threatening and demolishing ancient traces in the landscape as well as ancient sites; the expansion of modern urban centres is compromising the survival of ancient cities.
This panorama of political instability and constant threat towards the national cultural heritage, urges to develop a more centralised GIS recording system for the whole territory of Libya, so that the status of the sites can be kept under control and constantly monitored by the Departments of Antiquities. The project is working towards this goal through a series of specific targeted training courses and joint work with the Departments of Antiquities (both Tripolitania and Cyrenaica).

The project has two principal aims:
1.To understand the impact of the Arab conquest on Tripolitania, and on a wider perspective the whole of North Africa. The region had in fact a key role in the Arab conquest of North Africa bridging East and West. The project intends therefore to follow the transition from the Byzantine into the Arab period up to the 15th c. when a substantial restructuration of the landscape took place.
2.To develop a shared protocol for site recording and management within the territory investigated in the project. This aim develops in co-operation with the Libyan Departments of Antiquities and Susan Kane (Oberlin College - USA) in order to initiate a long-term plan for the management and preservation of multi-period archaeological sites . 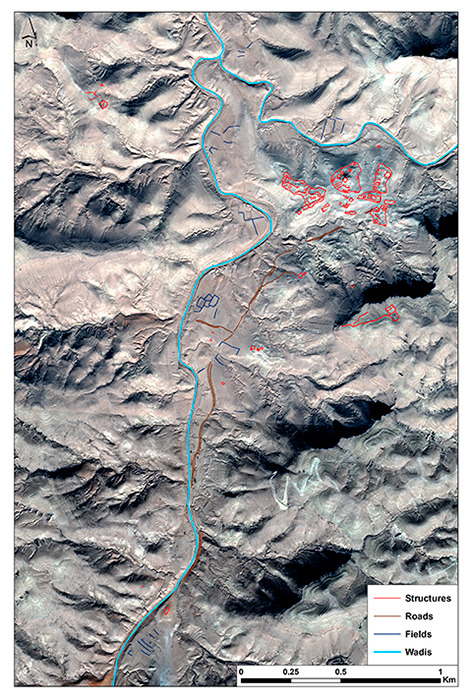 Fig 2: Mapping of archaeological features from the complex site of Sherwes.

Since 2014 a series of training courses on GIS and remote sensing have been conducted In Tunisia by the GIS/remote sensing Marco Nebbia (Durham University) funded by Durham University, the Society for Libyan Studies, the German Ministry of Foreigner Affairs with some support by Oberlin college (USA). A first pilot case study has been developed on the Gebel Nafusa. The three training courses focussed on the processing and management of the data collected during a field season conducted by the Department of Antiquity of Libya in Spring 2014. A total of 130 archaeological monuments of different nature and time periods have been in the territory of Jebel Nafusa.
Field data have been imported into a GIS platform by populating a bespoke geodatabase containing all the relevant information. Moreover, during the training courses, the use of satellite imagery has been addressed as a mean to detect more archaeological feature in the landscape, to explore the contextual archaeological surroundings of the sites recorded and finally to map hazards threatening the cultural heritage in the territory investigated. Specifically, the sprawl of modern towns has been mapped using a time series of Landsat images in order to detect the level of threat that these maybe represent towards the archaeological sites. Furthermore, the areas affected by water erosion and landslides have been mapped using the SRTM digital topographical model. Finally, the concentration of events of vandalism (recorded in the field) has been calculated using different spatial analysis tools in the GIS environment.
The combinations of these data produced a final risk map of the on-going and future hazards and threats endangering the archaeological remains in the region (Fig. 2).

GIS and remote sensing is seen by the staff members of the Department of Antiquities of Libya as an invaluable tool for recording, monitoring and preserving the cultural heritage in the country, especially in such an unstable political situation which limits the possibility of conducting fieldwork. 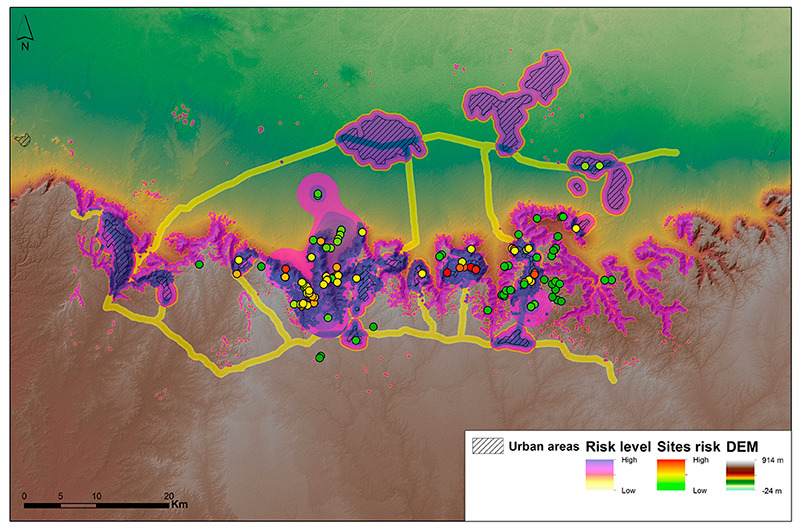