The definition and testing of the premise of the deliberate fragmentation of material culture has been researched for over a decade (Chapman 2000;Chapman & Gaydarska 2007). During this timespan the premise has witnessed a number of substantial developments and has also received some insightful criticisms (Brittain & Harris 2010) which all in all have broadened its initial scope. This research topic has been addressed in previous EAA Annual Meetings, giving special attention to its archaeological recognition and anthropological interpretation (Bournemouth, 1999) or focusing on the technical concerns of re-fitting exercises (Kraków, 2006). Currently the social practice of fragmentation is inseparable from other intertwined topics dealing with the formation of the archaeological record. Thus, this session draws upon recent theoretical proposals such as the appraisal of intentionality and social agency in past depositional practices, materiality, identity, personhood and alternative ontologies. This international event is aimed at contrasting different approaches to the fragmentation of material culture within a broad spatial and temporal framework. It is designed to discuss representative case studies involving both methodological and interpretative concerns. If successful, the results of this session will be published as a peer-reviewed monograph edited by the organisers.

Prospective speakers in this session are invited to address some of the following research issues:

The deadline for the submission of papers is on 15th March 2013.

The deadline for early fee registration is on 1st June 2013. 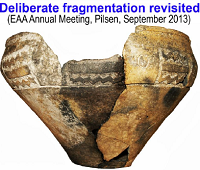