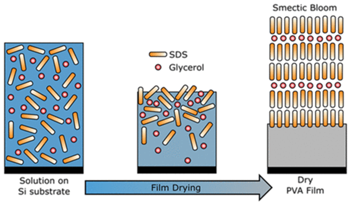 Recently published work by Richard Thompson and coworkers has been featured as a research highlight by the ISIS Neutron & Muon Source. The article nicely explains how the team used neutron reflectometry to study surfactant self-organisation in the context of laundry detergent pods, with some surprising results. This work is jointly funded by one of the UK Research Councils (EPSRC) and by industry (Procter and Gamble). 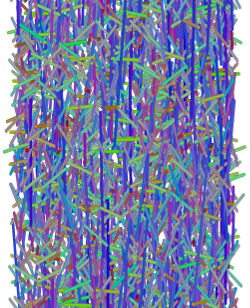 Carbon nanotubes can be used as a "filler" in composite materials to make the material electrically conductive. To do this, a network of nanotubes must percolate through the material, providing a contiguous conducting path. Conditions for percolation are optimal when the nanotubes point isotropically in all directions. However, formulation of nanotube composites tends to induce partial alignment of the particles, for example if flow of processing involves flow. This effect tends to raise the density of particles needed for percolation, potentially to the detriment of other material properties. Furthermore, the extent of alignment is sensitive to the length of the nanotubes, and real materials always contain a mixture of lengths. In this article, Mark Miller and Mihail Kotsev from Durham Chemistry have collaborated with Paul van der Schoot and Shari Finner at Eindhoven University of Technology to investigate how alignment affects percolation in nanotube mixtures. They make the remarkable prediction (based on both analytical theory and numerical simulations) that the length polydispersity of carbon nanotubes can counteract the undesirable increase in percolation density caused by alignment, making it possible for the mixture to percolate at a lower density than any of its individual pure components. This suggests a way to optimise the formulation of such materials. 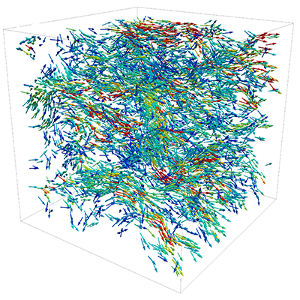 Sintering — or coalescence — of viscous droplets is a fundamental process that occurs in many natural and industrial scenarios, such as the manufacture of ceramics, and the welding of volcanic ash. Sintering is driven by surface tension, and causes compacts of coalescing droplets to densify and to become less permeable. In this paper, Fabian Wadsworth, Ed Llewellin, and Kate Dobson use synchrotron-source, 4D x-ray computed tomography to image the evolution of the internal geometry of a sintering compact of molten glass beads, and use lattice-Boltzmann simulations of gas flow through the deforming pore space to determine the evolution of permeability. They find that changes in permeability are linked to a topological inversion — from droplets in a continuous gas, to discrete bubbles in a continuous liquid — allowing them to construct a unified physical description of the sintering process. 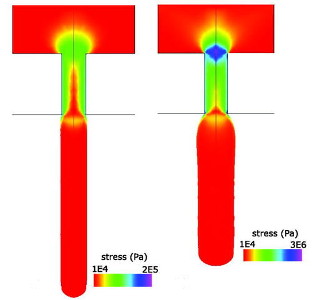 Extrudate swell is a phenomenon encountered in an industrial extrusion process and involves a polymer melt flow expanding perpendicular to the process flow direction. In this paper Ben Robertson, Richard Thompson, Tom McLeish and Ian Robinson show that this phenomenon is dependent on the stretch of polymer chains induced by flow within and at the exit from the melt extruder. We show that parameters such as molecular weight are not important when the process flow speed is normalised by the stretch relaxation time of the polymer. We use our Multi-Pass Rheometer to perform extrusion experiments and compare these to viscoelastic flow simulations, showing a good agreement between the two for monodisperse melts. We discuss the origins of disagreements for bidisperse blends and discuss methods of improving the simulations for these systems.

Edge fracture is a free surface instability that can develop when viscoelastic fluids are subjected to large shear-rates in common experimental geometries (e.g., cone and plate). The instability manifests as a disturbance that propagates inwards from the sample edge, and disrupts rheological measurements. By analysing the linear stability properties of a free surface between a bulk polymeric fluid under shear and the air, Ewan Hemingway, Halim Kusumaatmaja, and Suzanne Fielding explore the mechanisms that drive the edge fracture instability and characterise the critical shear-rate at which it first appears. These analytics also provide insight into how edge fracture might be avoided experimentally, for example by bathing the rheometer in a viscous fluid. The predictions are complemented by full 2D hydrodynamical simulations using a diffuse-interface approach which correctly capture the dynamics of the contact line (where the air/fluid interface meets the solid wall of the rheometer).

Sticking and sliding of lipid bilayers on deformable substrates

Biological lipid membranes are commonly bound to deformable structures, such as the cell cytoskeleton or the extracellular matrix. Having negligible elasticity, however, it is not obvious how the membrane conforms to the area deformation of the substrate without rupturing. To explore this question, Margarita Staykova and her coworkers confine artificial membranes to silicone substrates that can be bi-axially stretched and compressed with a well-defined rate and magnitude. We find that the membrane stress response depends substantially on the membrane-substrate interaction. Strongly adhered membranes follow the substrate area changes by absorbing (on stretch) and expelling (on compression) lipid protrusions, providing explanation for analogous observations on cells. Weakly adhered membranes on the other hand are able to slide over the deforming substrate, thus preserving their surface area constant. This novel system is expected to significantly extend the applications of the current lipid technologies beyond solid supported membranes, and contribute to our understanding of the mechanisms of membrane area regulation in cells. 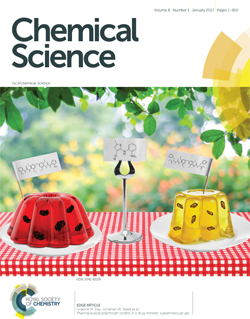 Supramolecular gels can exhibit drug-specific molecular recognition that change the polymorphic outcome of a pharmaceutical crystallization process entirely in ways that can be explicitly understood and designed for. In this paper the Steed and Day groups report the crystallization of the olanzapine precursor ROY from a gel of compound 1 (Scheme 1) which was explicitly designed to have the same peripheral chemical functionality as the ROY molecule itself. ROY is a very well explored model pharmaceutical which has ten polymorphic forms. The name comes from the Red, Orange and Yellow colours of the crystals. Gels of 1 (and ONLY 1) selectively result in the crystallization of the metastable red (R) form of ROY. A range of other gels and crystallization from solution under exactly the same conditions give the thermodynamically most stable yellow (Y) form (Scheme 1).

Gels are very difficult to structurally characterise, however, the group used computational crystal structure prediction methodology in combination with molecular conformational modelling to show that the role of the active gel surface gel is in stabilising the conformer most closely related to the R form of ROY and promoting its epitaxial deposition on a locally ordered segment of gel fibre.

Scheme 1. Crystallization of the Y form of ROY from a gel of a control compound and the metastable R form from a gel of the ROY-mimic gelator 1. The thermodynamic Y form is also obtained from solution under the same conditions. 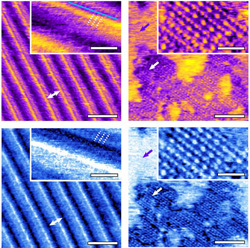 Kislon Voitchovsky and his collaborators have found that mixtures of water and simple alcohols can form stable two-dimensional networks at interfaces with hydrophobic surfaces in solution. Using a combination of atomic force microscopy and computer simulations they show that these solid-like assemblies are thermally nucleated around room temperature and stabilised by an extended network of hydrogen bonds. This is remarkable considering that neither pure water nor pure alcohol can form any stable structure in similar conditions. 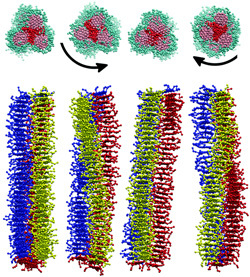 Molecules consisting of a triphenylene core with six (symmetrically equivalent) polyethylene glycol chains, spontaneously aggregate in water to form columns of various lengths. At high concentrations the columns are sufficiently long and rigid to form a nematic phase, where all the columns orient to a single axis. Walker and Wilson found that, by replacing some of the water-soluble polyethylene gylcol groups with simple hydrophobic groups, the behaviour of the molecule—and hence the phase—can be altered. Replace one or two adjacent groups and upon aggregation the molecules form columns, which further aggregate into dimer or trimer linked columns. Whilst the molecule that forms the columns has no inherent chirality, the column clusters spontaneously break symmetry to form either a, right- or left-handed double- or triple-helix. Since neither the right nor left handed helix is energetically favoured over the other, a helix is free to adopt either and switch between the two chiralities.

What marks these observations as critical is that with other, similar, systems chirality can be transferred between host (in this case water) and guest (in this case the triphenylene molecule) systems. This implies that the addition of a water-soluble chiral dopant could stabilise a single chirality of helix (for example, only the left handed helical columns). Moreover, the concentration of the chiral dopant could be used to tune the pitch of the helical columns. 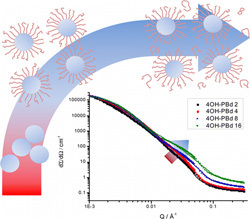 Richard Thompson and co-workers have recently shown that scaling laws for polymer brushes can be used to predict a transition in the dispersion of silica nanoparticles in nanocomposites. As well as quantifying the extent of grafting to the particles, small-angle neutron scattering experiments revealed a step change in the fractal dimension and aggregate size corresponding to the transition at which the grafted layer becomes entropically stretched. Complementary rheology experiments confirmed the enhanced dispersal via the disintegration of the silica network which could be exploited for nanocomposite processing. This work forms part of the STFC Global challenges studentship undertaken by James Hart. 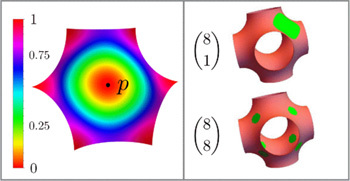 The so-called bicontinuous cubic phase of lipid membranes is remarkable for its high surface area, the continuity of the bilayer surface, the presence of two non-intersecting pore networks, and the possibility of embedding other molecules. This cubic phase is also seen in a number of organelles such as mitochondria and endoplasmic reticulum. These lipid mesophases usually contain more than one lipid species, or a mixture of lipids and other biomolecules. However, the distribution of different lipids across such a non-uniformly curved surface is still an open question.

As part of a large-scale EPSRC Programme Grant on lipid membranes, Fabien Paillusson, Matthew Pennington and Halim Kusumaatmaja have demonstrated that the competition between line tension and non-uniform Gaussian curvature indeed leads to new modalities for lipid patterning: line tension favours coalescence of separated domains to minimise the overall interfacial energy, while isolated domains are preferred due to the presence of non-uniform (Gaussian) curvature on the surface. The resulting morphology diagram is very rich, including a series of transitions in the preferred number of domains, the formation of stable bridges between previously disconnected lipid domains, and domain faceting as the boundaries follow the geodesics of the bicontinuous cubic phase surface. Furthermore, since the membrane morphologies have different symmetries, this should result in distinguishable experimental (e.g. x-ray scattering) signatures. 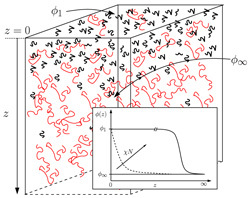 In this Letter, Tom McLeish and collaborators present theoretical calculations which explore a simple statistical field theory for the migration of small molecules within, and to the surface of, an elastic medium that also interacts energetically with them. Motivated by real-world industrial problems raised by Durham Centre for Soft Matter business partner Procter and Gamble, the work suggests pathways by which migration to the surface can be enhanced or suppressed by tuning the elasticity of the medium.