Our academics in the Department of Biosciences and Department of Physics have received £150,000 as part of a new business venture in ageing research.

Magnitude Biosciences Limited, a spin-out company from the University, will assist the ageing research industry and academic researchers in testing compounds, such as food additives and drugs, to understand how they impact the ageing process.

Carrying out ageing research can be challenging because large sample sizes are required to capture variability in ageing, with the process taking many years to yield results.

To tackle this, Magnitude Biosciences will test on nematode worms, called C.elegans, which are tubular-like organisms just about visible to the human eye without magnification.

They are an established method in ageing research due to their short lifespan (two to three weeks) and their size, which allows large quantities to be tested over relatively short periods of time.

The company has developed an innovative ‘healthspan machine’, which uses small, low cost computers linked to cameras to monitor large numbers of nematodes under multiple conditions.

The Northern Accelerator programme focuses on advanced manufacturing, the chemicals and process sector, life sciences and healthcare, and digital industries across the North East region.

The four joint founders of Geoptic Ltd are; Durham’s Professor Jon Gluyas, St Mary’s Dr Chris Steer, and, Sheffield’s Professor Lee Thompson and Dr Patrick Stowell. The company has combined the founders expertise in Earth Science and Physics to create a business that can survey railway tunnels more effectively than current methods. The technique uses naturally occurring cosmic ray muons to see through many tens of metres of soil and rock in order to identify regions of anomalous density.

Pepmotec was spun out of the Chemistry Department in 2019 and offers a custom synthesis service to the life sciences and pharmaceutical sectors. Using a novel, patented platform for protein and peptide modification, Pepmotec provides a fast and efficient service with enhanced flexibility over traditional modification technologies.

Founded in 2018, MammalWeb is a not-for-profit partnership between Durham University and Durham Wildlife Trust. It has developed a platform to engage volunteers in the routine monitoring of mammals. Volunteers deploy passive infrared camera traps in the environment to capture images of passing wildlife (principally mammals). They then upload the images and associated metadata to MammalWeb where they, and others, can classify the animals pictured. Using this platform, new constituencies of citizen scientists and conservationists will be targeted, who can contribute for mutual benefit.

Mammalweb were recently featured in a Guardian article on citizen science (28 July 2019), showing the diversity of animals captured on camera traps.

Lightox was founded in 2016 to commercialise research developed jointly by Durham’s Departments of Chemistry and Biosciences, the University of York, and High Force Research Ltd. Lightox cell killing technology employs a novel science and technology-driven approach to the selective killing of animal, bacterial and fungal cells using targeted photodynamic therapy (PDT). The Lightox technology presents significant advantages over conventional therapeutic options for the elimination of dangerous cells and/or site and tissue selective surgery. By localizing both the photosensitizers (PS) and the light exposure to known primary and secondary tumour regions, the Lightox technology can both selectively and effectively eliminate tumour cells without significant disruption of surrounding non-cancerous tissues, preserving healthy local cells, and reducing both the aesthetic and functional impairments associated with existing treatment options including excision and chemo-radiation.

Lightox win Bionow Start up of the Year Award 2018: link

Kromek was founded in 2003 to commercialise technology developed by Durham University’s Physics Department and has Headquarters at NETPark, Sedgefield Co. Durham. Their vision is to be the world-leading provider of multispectral radiation detection products operating in the Medical Imaging, Nuclear Detection and Security Screening markets. Kromek was admitted to the London Stock Market AIM listing in October 2013.

FScan span out of Durham University’s Chemistry Department in 2008. It focuses on the development of commercial applications of its luminescent lanthanide chemistry technology platform.

Reinnervate was founded in 2002 to commercialise research from Durham’s Department of Biosciences. It specialises in the development of enabling technologies for research into cell growth and function. It develops novel approaches to monitor and control cell differentiation with distinct applications in stem cell biology. Reinnervate was aquired by ReproCELL in 2014 and was merged with Biopta to form ReproCELL Europe Ltd in July 2016. Reinnervate’s core strength was in its Alvetex® family of 3D cell culture products, providing a flexible platform that allows scientists in any life science laboratory to easily establish improved in vitro assays and tissue models that better mimic the in vivo growth of cells. Alvetex continues to be developed, produced and distributed by ReproCELL Europe.

OlexSys span out from Durham’s Department of Chemistry in 2010. It maintains and enhances the open source Olex2 software for the solution, analysis of crystal structures. OlexSys offers specialist training in chemical crystallography and other services for small-molecule crystal structure determination.

Concept Analyst is a spin out from Durham’s School of Engineering and Computing Science. Formed in 2001 it owns specialist stress analysis software and develops new applications. It is used for traditional analysis problems and as a teaching tool.

Span out in 2002 from the Physics Department, DMO specialises in the supply of advanced scientific equipment for research and development and magneto-optical magnetometers for magnetic nanotechnology. Applications include magnetic thin films, nanostructures and tunnel junctions, MRAM, hard disk read / write heads and spintronic devices.

Goliath Wind is an Estonian company formed in 2008. Durham University acquired shares in exchange for technology from the Engineering Department. It has developed a gearbox-free wind turbine.

This Company span out from the Chemistry Department in 2001 designing functional nanocoatings for surface properties. In 2010 it was sold to P2I ltd.

Geoenergy Durham Ltd span out in 2010. It’s a consultancy company offering bespoke services to the geoenergy sector in the emerging themes of carbon capture and storage, unconventional hydrocarbons, clean coal and geothermal energy. 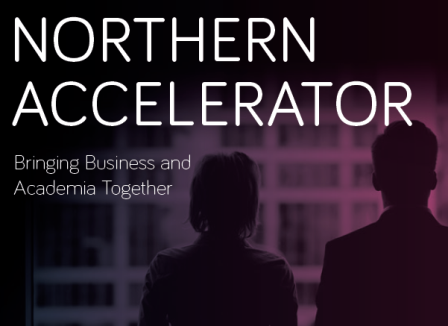 Northern Accelerator
Support available for experienced CEOs to join us at the pre-commercial stage of business
A Newcastle University and Durham University joint project part-funded by the European Regional Development Fund.