I teach a postgraduate course on 'Data Acquisition' as part of the MSc in Scientific Computing and Data Analysis (MISCADA). 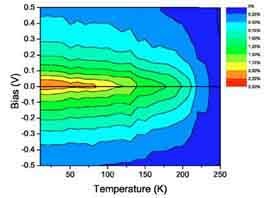 Conventional electronics utilises only the charge of the electron: Spintronics additionally uses the intrinsic 'spin' of the electron as a further state variable to process, convey, and store information. Novel spintronic device architectures promise both enhanced capabilities and reduced power consumption: one outcome of this so-far is the massive increase in magnetic data-storage capacity in recent years, which has enabled high data-capacity consumer technologies such as personal media players, internet email and data storage, and high-definition television-on-demand services. My research centres around the fundamental physical mechanisms underpinning spin-polarized electrical conduction and magnetism in nanostructured spintronic devices. This is achieved using a combination of magnetic and electrical measurements, in conjunction with synchrotron x-ray and neutron scattering techniques.

Spin-polarised currents naturally arise in ferromagnetic metals. However, the effects which are useful in harnessing such currents for spintronics - spin-coherence, electrostatic screening, and evanescent decay lengths; electron mean-free-paths; magnetic domain-wall widths etc. - typically involve lengthscales on the nanometer scale. The passage of spin-polarised currents through a device is intrinsically linked to the detailed electronic structure of materials, making it possible to probe fundamental quantum-mechanical effects in magnetic nanostructures from something as simple as electrical resistance measurements. In order to study and exploit spin-polarised currents it is often necessary to fabricate thin-film or multilayered magnetic devices: magnetic thin-films and nanostructures present a wealth of novel and interesting physics in themselves. One aspect in which I am interested is hybrid structures combining metallic magnetic materials with semiconductors: incorporating the spin degree of freedom in inorganic semiconductor (Si, GaAs etc.) devices allows extension of traditional functionality, whilst organic semiconductors provide the scope for spintronic functionality to be added in future low-cost printable and flexible electronics. 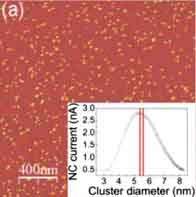 Nanomaterials bridge the gap between individual atoms and bulk material: Thin-films, consisting sometimes of only a few atomic monolayers, can exhibit very different electrical and magnetic properties than their bulk counterparts due to symmetry breaking at surfaces and interfaces reducing the dimensionality of the system, whereas in nanoclusters long-range translational symmetry is entirely removed. The competition surface/interface and volume effects means that varying film thicknesses or cluster sizes over only a very small, even sub-nanometer, range can result in drastic modification to how materials behave. This provides an ideal method to engineer suitable magnetic properties for a given device application. Much of my research in this are centred on the magnetic anisotropy found in magnetic metal-inorganic semiconductor hybrid contacts: forming an atomically abrupt interface between nanoscale layers of different classes of material often produces novel, interesting, and technologically useful effects.

Deposition and fabrication of thin-film devices 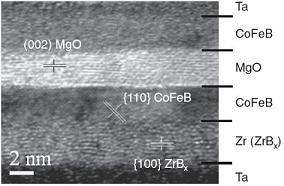 Functionality of many of the layered structures relevant for present and future spintronic devices relies heavily on the exact structure of the device materials on an atomic scale: crystal structure and orientation; abrupt, smooth layer interfaces and pattern definition etc., in addition to avoiding damage to the underlying material or structure during fabrication. In addition to a degree of control required in order to fabricate modern devices, the material growth techniques employed must also be suitable for the high throughput, rapid turnaround manufacturing processes required for large-scale industrial application.

Large scale facilities provide the ability to investigate both structure and magnetism in nanomaterials and devices. Synchrotron techniques allow element-specific structural and magnetic characterisation, in addition to nanoscale imaging. Neutron reflectivity methods are used to determine vector magnetization depth-profiles of buried structures and interfaces. National and international facilities are used in my research, including the ISIS neutron source and Diamond Light Source (UK), and the US National Synchrotron Light Source. Using these techniques provides many opportunities to understand the underlying physics behind the many magnetic interactions which can occur at surfaces and interfaces: with this understanding we are then able to tailor the material properties to provide enhanced performance and functionality in future devices (Image courtesy of NSLS, Brookhaven National Laboratory).