Award for research that could revolutionise computing 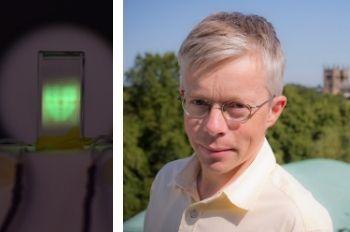 Professor Charles Adams and colleagues’ work on light and atoms could provide the ideal building blocks for quantum computers and improved medical scanners.

Charles’ research has been recognised by the Institute of Physics-Société Française de Physique who have jointly awarded him The Holweck Prize 2020.

He and his team use laser beams to cool and excite atoms in a vacuum with the result that they expand in size.

This creates a situation where light particles – or photons – normally non-interacting can collide and interact strongly with each other.

It’s this interaction that could eventually lead to electronics in computers being replaced by photonics – where data is transferred by light particles connecting with each other.

This could eventually make our computers faster, more efficient, and more connected, enabling us to tackle problems that are inaccessible using current devices.

Alternatively, the technology could be used to improve communication between quantum computers based on any technology forming the basis of a quantum internet.

Other applications might include better electromagnetic sensors that could be used to assess the condition of buildings or structures and to detect illnesses in medicine or water shortages in crops.