A collaboration between the Physics and Engineering Departments at Durham and Heriot-Watt University has been awarded £400K by the Leverhulme Trust to develop a new method for magnetic imaging. The imaging method is based upon on the manipulation of the spins of electrons associated with deep–level divacancy defects in the semiconductor material silicon carbide. The response of the electron spins to magnetic fields produced by nano–scale magnetic features utilizes Photo-Electric Magnetic Resonance, which is based upon the spin-dependent photo–ionization of the deep-level defect and detection of the resulting photo-current. The use of silicon carbide allow for the development of an electrically-interrogated quantum sensor which is capable of providing a quantitative measure of magnetic field strength at length scales of less than one micrometre.

Dr Ian Terry (Physics) said "the carbon–silicon divacancy defects in silicon carbide are extremely sensitive to magnetic fields. By integrating this technology into a transistor structure, we will seek to increase the sensitivity and integrate this nascent technology with electronic circuits to realise the first electrically interrogated, non-invasive imaging array for sub-micron magnetic field imaging capable of simultaneously determining the vector components of the field at room temperature." 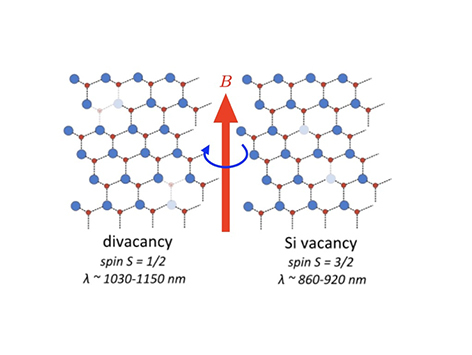