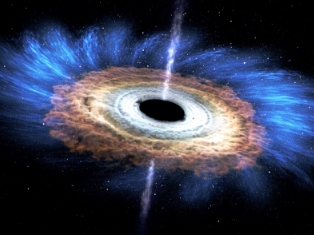 Two astrophysicists have been honoured for research to further our understanding of black holes and the effects of gravity.

The Royal Astronomical Society (RAS) has awarded the 2019 George Darwin Lecture in Astronomy to Professor Chris Done for her research into black holes and her skills as a public speaker.

Dr Baojiu Li will also receive the RAS’s Fowler Award for pioneering the development and application of computer simulations to test modified theories about gravity.

Professor Done is regarded as an international leader in observations of black hole accretion, when surrounding material falls into the black hole, and their associated jets and winds.

She joins a prestigious list of former recipients of the George Darwin Lecture including Nobel Prize winner Kip Thorne, known for his contributions to the detection of gravitational waves.

In 2010, the lecture was given by the Director of our Institute for Computational Cosmology, Professor Carlos Frenk, who is the recipient of the Gold Medal of the Royal Astronomical Society, its highest honour.

Dr Li’s work is helping scientists to research alternatives to Einstein’s theory of General Relativity and has the potential to lead to a major step forward in our understanding of gravity on large scales.

His breakthrough in computer coding has opened up new opportunities, allowing for the first quantitative investigations of cosmic large-scale structure in modified gravity models.

Dr Li will be presented with the Fowler Award at the National Astronomy Meeting in July.

The RAS awards recognise the achievements of scientists working in the fields of astronomy and geophysics.

Professor Mike Cruise, President of the Royal Astronomical Society, said: “Our prizes are won by researchers at all stages of their careers, studying the core of the Earth, the distant Universe, and everything in between. My congratulations to them all.”