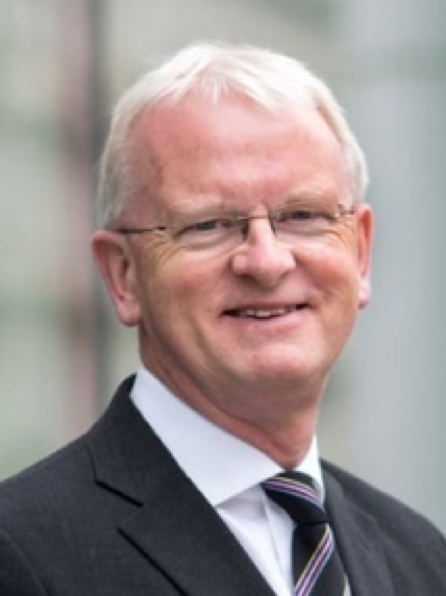 It is with great sadness that we mark the passing of Professor James Stirling on 9 November.

James Stirling came to Durham in 1986 from CERN as a joint appointment in the Departments of Mathematical Sciences and Physics. An outstanding researcher, James was also a gifted teacher, and he rose quickly through the ranks as Senior Lecturer (1989), Reader (1990) and Professor (1994).

He was famous amongst the student body for the Stirling break – a 3-minute pause mid lecture. In 2000, James became the inaugural Director of the Durham Institute for Particle Physics Phenomenology (IPPP). He was appointed Pro-Vice Chancellor for Research in 2005, before leaving Durham to take up the Jacksonian Chair of Natural Philosophy in Cambridge in 2008.

After a spell as Head of the Cavendish, he became the first Provost of Imperial College, a post he held until his retirement earlier this year.

James studied Mathematics at Cambridge (Peterhouse College) graduating with first class honours in 1975 and obtained his PhD in Theoretical Particle Physics in 1979. After postdoctoral positions at the University of Washington in Seattle, and then again in Cambridge, James went to CERN in 1983, becoming a staff member in 1985.

James’s field was theoretical elementary particle physics, with a particular emphasis on “phenomenology”, the confrontation of theoretical predictions with experimental results, and the use of experimental data to shed light on the fundamental theory of particles and forces. He was a prolific researcher, publishing more than 330 articles in journals and conference proceedings, including some of the most highly cited of all time in the physical sciences. Typically, his research was penetrative and insightful, and he had the gift of explaining complicated concepts and ideas simply.

His textbook on “QCD and Collider Physics” with Keith Ellis and Bryan Webber has been the standard reference in the field for more than 20 years. For more than 25 years, his collaboration with Alan Martin, Dick Roberts and later Robert Thorne, set the standard for understanding what is going on inside the proton. The quality of his research is widely recognised in the community and his election as Fellow of the Royal Society in 1999 was no surprise.

James was intrinsically a humble and modest person but his intellectual brilliance, coupled with a very strong work ethic, meant that his services were always in demand. Frequently, he would leave his imprint, as inaugural Director of the Institute for Particle Physics Phenomenology, as the first Chair of the PPARC Science Committee, the research council’s top-level scientific advisory committee and latterly as the first Provost of Imperial College.

James was ground breaking in every sense and utterly reliable. The structures and processes he established in Durham, Cambridge and Imperial, bear testament to his intelligence and organisational powers. He was awarded a CBE in the 2006 New Years Honours list for services to science.

During his five-year tenure at Imperial, James was responsible for leading Imperial’s core academic mission of education, research and innovation. In keeping with his supportive and constructive attitude, he became known for championing the development and wellbeing of staff throughout Imperial, with a particular focus on marginalised and underrepresented groups. Jamesreceived an honorary doctorate of science for his outstanding contributions to physics and to the College, following his retirement in the summer.

After leaving Durham, James maintained a close connection – acting on the Advisory Council for the Institute for Advanced Studies (another of his initiatives as PVC-R) and through the annual Stirling lecture hosted by the IPPP.

His final few weeks were spent at his home in Durham surrounded by his loving family - his wife Paula, children Tom and Helena, and grandchildren Verity, Justin, Grace and Flora.

A private family funeral will take place in the coming weeks, followed by a memorial service for all at a later date. Donations in his memory to Macmillan Cancer Support or Marie Curie.