£675K awarded as part of a new three Universities project to study new concepts in the design of ultra efficient OLED emitters.

Prof Monkman has been awarded £675,000 as part of a new three Universities project to study new concepts in the design of ultra efficient OLED emitters for the next generation of OLED TVs. The project worth in total nearly £2M will combined Quantum Chemistry modelling in Newcastle and Synthetic Chemistry in Glasgow with novel spectroscopy and device physics in Durham. The goal of this flagship project is to utilise the phenomenon of through space charge transfer and multiple resonant excited states to produce ultra efficient deep blue light emitters which will be used in a new type of OLED TV design that only requires the generation of blue light. Red and green light will be generated by quantum dot fluorescent down converting filters. As part of the project, a new UK Biochemistry Company becomes a partner, expanding their synthetic chemistry know-how into new avenues of OLED materials production.

Prof Monkman said "this new project is a result of several break through developments made in Durham and Newcastle, and has raised greater awareness in the UK Chemistry Industries so that new players, never before involved in OLED technology, are now willing to invest because of the potential step change in OLED technology these new materials offer. It is great to see renewed interest in OLED materials development in the UK" 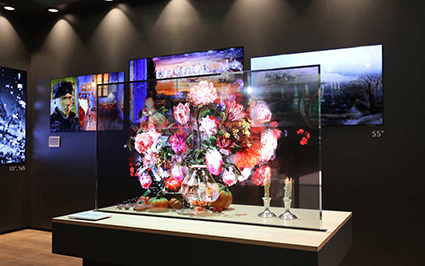