Dante. Hell, Heaven and Hope: A Journey through Life and the Afterlife with Dante 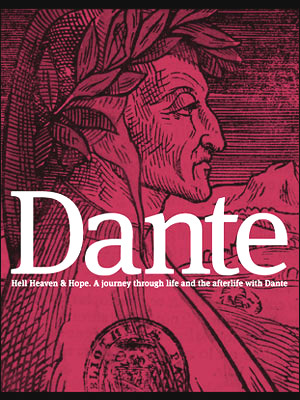 Conceiving Dante’s oeuvre, and the Commedia in particular, as a ‘living text’ helps understand the creative moment of its conception and execution, as well as the journey of its transmission and reception. The nature and significance of Dante’s position in seven centuries of cultural history – and counting – is illuminated by a selection of rare manuscripts, printed books and artworks from the renowned collection of Livio Ambrogio on display at Palace Green Library, Durham, from 2 December 2017 to 18 March 2018. The items on display and illustrated in the volume range from fourteenth-century manuscripts and illustrated early modern editions (one of which with engravings after drawings by Botticelli) of the Divine Comedy to copies of the poem once belonging to Samuel Taylor Coleridge, Dante Gabriel Rossetti and T. S. Eliot. The selection also includes autograph originals by Alexandre Dumas père, Jorge Luis Borges and by director, actor and Academy Award winner RobertoBenigni.

The volume has been envisioned as a way of accessing Dante’s oeuvre, via a number of broad key-themes selected from his work and discussed in the Introduction (‘Initiating the journey’): justice, displacement, the importance and consequences of personal choice, the position of human beings in the universe, love, and ultimately hope. This is followed by eleven sections, variously devoted to introduce cognate aspects of Dante’s work and fame and arranged to offer a guide to his enduring legacy. In addition, the volume includes a foreword by Richard Gameson, essays by Giles Gasper, Michael O’Neill, Nicola Gardini and Jason Harding, and Dante-inspired translations and lyrics by Michael O’Neill.

Chronology of Dante’s life and works

A minor incident
Getting a second chance
An overwhelming story
What moves one to tears?
Free will
Worth, knowledge and freedom
Guides for the journey
Beatrice’s tears, Beatrice’s smile
A poet’s universe

1. Dante’s appearance
2. Dante before the Commedia
3. The poem and its dissemination
4. Visualizing the Commedia in early printing
5. Dante for the journey
6. Translating Dante’s wor(l)ds
7. Dante and the arts
8. The poets’ poet
9. Dante’s cosmos
10. ‘Bound with love in one volume’
11. Beatrice’s tears, Beatrice’s smile. Envoi