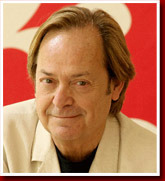 Ventura Pons, one of the most important and prolific Spanish film directors of the democratic period will give a talk in Durham entitled 'Looking for Film in Literature'. Followed by cava reception and Spanish cafe at Gala Theatre.

Free of charge for Durham students who attend the talk (up to 30 – first come, first served).


After a decade as a theatre director, Ventura Pons directed his first film in 1977, Ocaña, an intermittent portrait, which was officially selected by the 1978 Cannes Film Festival. With twenty feature films, nineteen produced by his own company Els Films de la Rambla, S.A., founded in 1985, he has become one of the best-known Catalan film directors. His films are continuously programmed in the best International Festivals, with a main interest from the Berlinale, where he has been officially selected during five consecutive years, and distributed in a lot of countries around the world.

He has been the subject of homages by the Bogota, Thessaloniki, Belgrade, Dijon and Luxembourg Film Festivals. The ICA (Institute of Contemporary Arts) in London, the Lincoln Center in New York, the Buenos Aires, Warsaw, Valdivia and the Istanbul Film Festival, the Tel-Aviv, Jerusalem and Haifa Cinematheques in Israel and the American Cinematheque in Los Angeles have presented retrospectives of his films. He has been Vice-President of the Spanish Film Academy and has been elected to the Board of the Spanish Society of Authors. He has also been awarded with the National Film Award from the Catalan Government, the prestigious Ondas Award, the City of Huesca Award and the Spain Fine Arts Gold Medal and the Catalan Sant Jordi Cross.