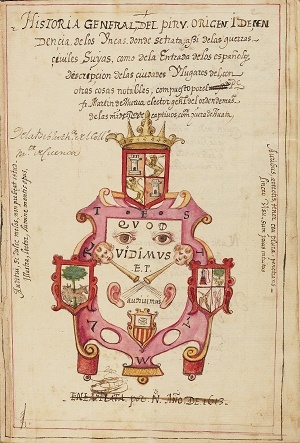 Better known by the royal decrees that governed it than by its practice, book censorship in Early Modern Spain remains an elusive topic. How did it work in individual instances? Were there authors who defied it? I take up here two works, one an imprint published and expurgated; the other a manuscript, approved for printing but never published. Both reveal the marks of the censor’s pen (occasionally, knife) but also the literary personalities of the authors whose writings were scrutinized and who might well have uttered (or muttered!): “Obedezco pero no cumplo”, “I heed your order but I do not follow its command.” Their works belong to the genre of “proto-anthropology” that studied the always-sensitive topic of civilizations ancient and modern, from the Old World and the New. Please meet Fray Jerónimo Román y Zamora and his account of “all the world’s peoples,” Repúblicas del Mundo, and Fray Martín de Murúa and his history of the Incas, Historia general del Piru (the title page of which will introduce my talk).