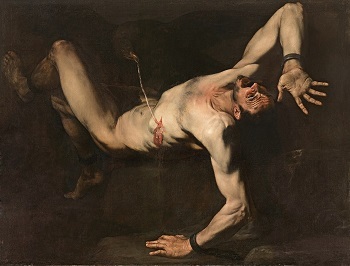 Paintings by the Spanish Baroque artist, Jusepe de Ribera (1591–1652), prompted a range of contradictory responses in the nineteenth century. Poets, travel writers, critics and artists reacted to his work, especially his striking depictions of violent subjects, at once with admiration and displeasure. In his epic poem Don Juan (1823), Lord Byron declares that ‘Spagnoletto tainted / His brush with all the blood of all the sainted’, and in 1845, Théophile Gautier published two poems on the artist, referring to Ribera as ‘le noir Valencian’, and ‘plus dur que Jupiter’. While Byron and Gautier are often quoted in the literature on the artist, scholars have been swift to dismiss these responses as ‘muddying the waters’ of Ribera’s œuvre, and thus his reception during the nineteenth century has, until recently, received scant scholarly attention.

Through a close, comparative study of Ribera’s paintings and Gautier’s poems, this lecture will explore nineteenth-century attitudes towards extreme imagery in the context of the revival of the Spanish School in France. It will provide a more contextualised and nuanced account of Ribera’s reception during the nineteenth century, and demonstrate that Gautier’s poetic responses are not, in fact, distorting, but revealing. The lecture will argue for the significance of these poems by suggesting that Gautier calls attention to the problematic relationship between the act of inflicting torture and the art of representing pain, a tension which is central to an understanding of Ribera’s violent imagery, and to the myth-making of Ribera as a ‘violent’ artist.