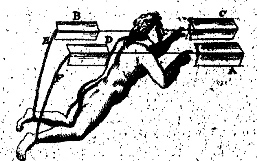 Professor Richard Maber will be giving his Inaugural Lecture entitled 'Texts, Travel and Flying Machines: The Lost World of Seventeenth-Century Scholarship'. All members of the University and the wider public are invited to attend this event which will be followed by refreshments served outside the lecture theatre. There will no be charge for this event.

The most influential shared ideal of 17th-century intellectual life was that of the European Republic of Letters: an ideal of friendship and mutual assistance in the furthering of knowledge that rose above all religious and political differences. The concept, inherited from the Renaissance, was given especial urgency by the vast upheavals of the century. This dynamic, multifaceted, highly mobile and constantly evolving scholarly world was sustained by extensive personal contacts, and above all by indefatigable letter-writing. Thousands of scholars working all over Europe maintained complex interlocking networks of correspondence, of which hundreds of thousands of letters survive, often in unexpected places.

The study of these scattered correspondences is both challenging and immensely rewarding: they are crucial to understanding the real practical workings of 17th-century intellectual exchanges, which made a profound contribution to the development of the modern world. The scholars themselves are highly diverse individuals, admirable or exasperating, often humorous and sometimes startlingly eccentric, whose relations are sustained by warm friendships but also sometimes enlivened by spectacular quarrels. While their principal concern is frequently meticulous textual and historical scholarship they maintain a lively interest in personal affairs, and in the latest ideas, discoveries and inventions.

In this lecture I shall talk about the importance of this remarkable and – despite recent work – still largely unexploited resource, the fascination of entering into the world of these early modern scholars through their correspondence, the rewards of its study and the discoveries to be made. I shall also consider the different interpretative approaches that have been brought to bear on the learned correspondence networks, and the most promising avenues for future research.