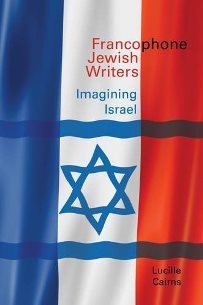 The Centre for the Study of Jewish Culture, Society and Politics is warmly inviting you to the book launch of Professor Lucille Cairns's new monograph Francophone Jewish Writers Imagining Israel.

The book launch will take place on Thursday 21 January, from 5 pm to 6.30 pm in the Williams Library of St Chad's College (18 North Bailey, Durham DH1 3RH).

This book considers the differing emotional investments in Israel of, on the one hand, Jews physically domiciled in Israel and, on the other hand, diasporic Jews living outside Israel for whom the country nonetheless forms a central point of affect. The book’s purpose is to trace how these two types of investment are represented by francophone Jewish writers. Israel is at once a problematic geopolitical reality in international politics and a salient topos within Jewish cultural imaginaries that transcend national boundaries. However, it has often been claimed that Israel has a “special” relationship with France, which until 1967 was its greatest ally. Israel has a large francophone community (some 800,000), while France has the largest Jewish community in Europe (some 600,000). But Franco-Israeli relations have undergone radical, largely negative transformations under the Fifth Republic (1958- ). The scope of the book is wide, addressing the following questions. How do francophone Jewish writers represent Israel in their literary works? What responses to the Israeli-Palestinian conflict do they express both in these works and in non-literary discourse (interviews and journalistic articles)? What is the role in those responses of emotion, affect, cognition, and ethics? To answer these questions, the book examines 44 different autobiographies, memoirs and novels published between 1965 and 2012 by 27 different authors, both male and female, covering the full cultural spectrum of Jews: Ashkenazic, Sephardic, and Mizrahi. The approach of the book is interdisciplinary, combining literary analysis with insights from the domains of history, journalism, philosophy, politics, psychoanalysis, and sociology.

The event is free and all are welcome!