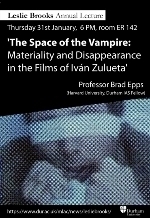 LESLIE BROOKS LECTURE 2013: Professor Brad Epps [Harvard University], 'The Space of the Vampire: Materiality and Disappearance in the Films of Iván Zulueta'

This paper examines the work of experimental Spanish filmmaker Iván Zulueta in the light of darkness and disappearance: that of the filmmaker (after a lengthy “battle” with drug addiction), that of the characters within the films (especially his most celebrated feature, Arrebato, or Rapture), and that of the filmstrip itself (the interstices of the frames or photograms, the fragility of celluloid as material support, and the rise of new technologies, from video to electronic and digital modalities).  As a symbolically charged (dis)embodiment of darkness and disappearance, the vampire here looms large, especially in Arrebato, whose tale of intersubjective relations between men is nourished by intermedial relations between machines.