Enforcement systems are a crucial to effective labour regulation regimes. Traditionally, enforcement of labour rights has been the responsibility of the state. Yet state enforcement is often ineffective. In lower-income countries, outsourcing of production through global value chains has highlighted the weakness of government inspectorates, and state enforcement often excludes lead firms.

Private regulation has been tested, most commonly through corporate social responsibility (CSR) codes and auditing/certification. CSR has made lead firms at least partly responsible for compliance with labour rights in their supply chains. Yet often the focus is on local supplying firms.

In response to these challenges, there is a growing consensus that the integration of non-state actors - e.g. trade unions, NGOs - into state enforcement can strengthen compliance with labour standards. These hybrid models are being tested in the garment sector and involve collaborations between buyers, governments, unions, and factories. One well known example is the ILO/World Bank Better Work programme.

Hybrid models seem to be promising for the effective implementation of labour standards. Yet they have not been rigorously investigated from the perspective of those intended to benefit: workers.

The Strategic Network on Legal Regulation of Unacceptable Forms of Work has designed a set of Research Agendas on combatting unacceptable work. The Research Agenda on Enforcing Labour Laws outlines a strategy for investigating the effectiveness of hybrid models of enforcement.

The Research Agenda has been designed by a Strategic Network Team that includes researchers and policy actors from across the world: 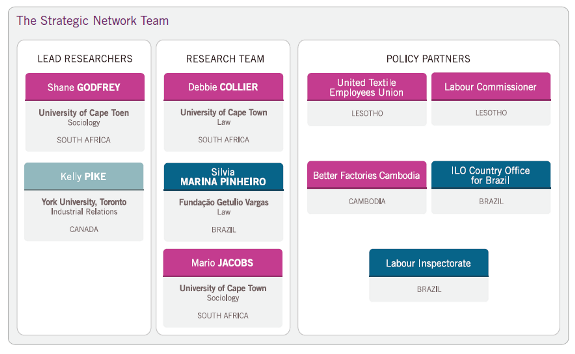 Comparative research on regulatory frameworks is crucial to combat UFW. It can provide global lessons from innovations in different countries. For this reason, the Network Team on Enforcing Labour Laws has suggested that future research should involve comparisons of countries at a range of income levels and in different regions. 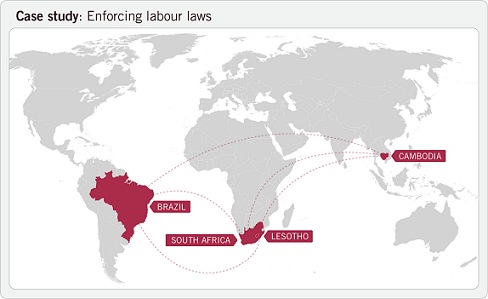 The Decent Work Regulation Project has conducted a study on the most urgent challenges to public and private enforcement of labour standards in the South African and Lesotho garment sectors. The study is based on data from a series of interviews with local actors (e.g. government officials, employers, unions, NGOs). The aim was to understand the influence of labour market enforcement systems on worker outcomes.

For further information, visit our page on the Developmental Enforcement Report. 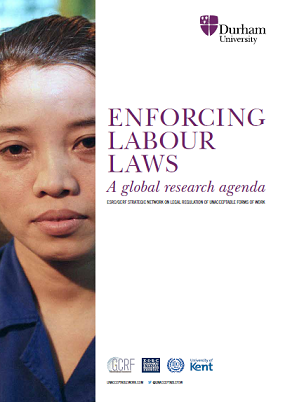 The objective of the research agenda is to understand the strengths and limitations of hybrid mechanisms in enforcing labour rights in lower-income countries.