Rethabile’s Story Launch Event and Round Table on Africa in the Future of Work, ILO Geneva 8 July 2019 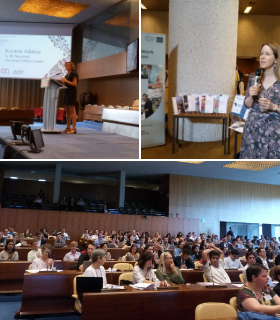 The Regulating for Decent Work (RDW) Conference was held in the UN International Labour Office, Geneva, from 8-10 July 2019. The Conference focused on the future of work, with the goal of identifying the innovative institutions and transformative policies that can help to ensure more equitable and just societies.

The RDW Conference was co-hosted by Durham Law School, which has a longstanding relationship with the International Labour Organization (ILO) through Professor Deirdre McCann, the Principal Investigator of the Decent Work Regulation Project.

The leading international interdisciplinary conference on labour regulation, RDW was initiated by Professor McCann and Dr Sangheon Lee (ILO) and has been held bi-annually since 2009. 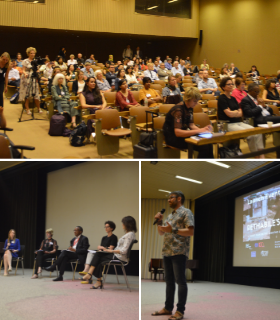 Special Session: Rethabile’s Story screening and Round Table on Africa in the Future of Work

The project on Decent Work Regulation (DWR) held a Special Session on the first day of the RDW Conference (8 July 2019). The Session launched our short film on the Lesotho garment sector - Rethabile's Story - in discussion with the director and producer, Darren Hutchinson.

Rethabile’s Story was simultaneously launched at the Special Session and on the DWR Project’s channel on YouTube.

The panel was chaired by Professor Deirdre McCann. 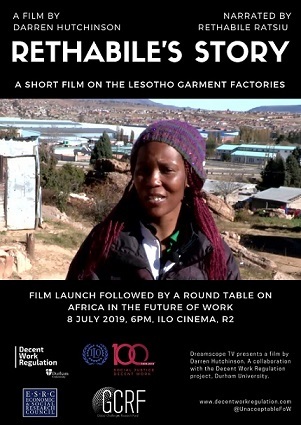 During 2018, the project on Decent Work Regulation in Africa (DWR-Africa) investigated conditions of work and the influence of labour standards in the garment sectors of Lesotho and South Africa.

As part of the Project, and in collaboration with Dreamscope TV, Rethabile's Story explores daily life in the Lesotho garment sector through the eyes of an ex-worker and her friends.

The film highlights the challenges faced in the sector and explores garment sector workers' experiences of working life and hopes for the future.

Rethabile's Story is available on the DWR Project's YouTube channel. A short (8 minute) version is available both on Youtube and Vimeo.

The DWR-Africa Project is a collaboration between Durham University (UK), the University of Cape Town (South Africa) and York University (Canada). It is led by Professor Deirdre McCann and funded through the UK’s Global Challenges Research Fund (GCRF) and Economic and Social Research Council (ESRC).