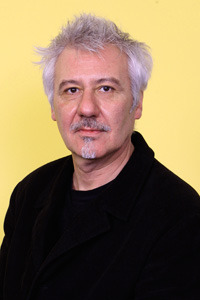 It is with sadness that we announce the death, following a short illness, of artist Chris Gollon, who was an IAS Fellow in 2009, and a member of St Mary’s College. At the IAS, Chris worked on a series of paintings as part of the Institute’s Being Human theme. His work made a further impression in Durham in 2015, when the Cathedral hosted an exhibition of his series of paintings about women in the Bible. Former IAS Director, Professor Ash Amin, notes that:

Chris was an exemplary artist in residence during our Being Human theme, observing and working with the academic fellows, and always present at their lectures and seminars. After three months he produced an astonishing number of paintings based on his engagement at the IAS. Modest to a fault, few knew what a great artist we had in our midst. We were overjoyed by the two paintings he donated to the IAS. His death is a tragic loss felt by all of us who were privileged to have known him.

An established name in British painting, Chris first became known as a finalist in The Spectator Prize in 1989, and exhibited with Yoko Ono, David Bowie and Gavin Turk in 1998. In 2000 he was commissioned by the Church of England to paint 14 Stations of the Cross, and in 2004 he exhibited work in St Paul’s Cathedral with Bill Viola, Craigie Aitchison and Tracey Emin. His paintings are now included in the collections of several major museums and art galleries, and he also collaborated with film makers JABOD in 2005 to create a new cinematic art work, featuring over 500 of his paintings set to music by Gavin Bryars (with Tom Waits), Paolo Conte and Calexico. The film installation, entitled ‘Kaleidomorphism', was successfully premiered in 2008 at the East End Film Festival in London.

Further information about his work, and his involvement at the IAS is available at: https://www.dur.ac.uk/ias/fellows/0809fellows/gollon/ or at his home website www.chrisgollon.com