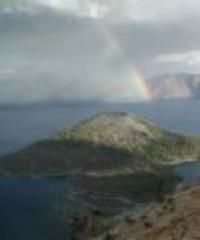 Water on the Earth and Beyond Public Lecture - Seismic Oceanography: a new look at ocean processes

This is the first lecture in the 'Water on the Earth and Beyond' public lecture series.

The 2009 Copenhagen United Nations conference on climate change is approaching. The fact that our activities are a major cause of the change is now generally accepted; however there is still great uncertainty as to how the climate will evolve. This is partly due to uncertainty about which scenario of gas emissions is going to occur but also due to approximations in the various computer programs used for climate modelling. This public lecture will present new research concerning our understanding of ocean processes, funded by the European Commission and led by Durham University, which will ultimately improve these computer models and give us more confidence in predicting our future environment.

A key element to climate computer models is the rate and location of mixing of the ocean water. It is this that underpins our understanding of ocean circulation and predictions of how the rapidly the oceans will respond to climate change. Historically the oceans have been investigated by detailed sampling from ships at isolated locations. By correlation of the measurements, the broad structure of the oceans was deduced: an upper layer of warm water up to 1000m thick overlaid a deep layer of dense cold water that filled the ocean basins. Furthermore, these deep ocean waters were found to be part of a global circulation system that links the Arctic, Antarctic, Indian and Pacific oceans. In the Arctic, the cooling of the surface water and ice formation creates cold dense water that sinks to the abyss. This water then starts a long journey to the Indian and Pacific Oceans via the Atlantic and Antarctic Circumpolar Current. Once in the Indian and Pacific Oceans vertical mixing of heat brings the abyssal waters to the surface where they complete the return path to the Arctic Ocean.

The mapping of the sea-surface by satellite in the late twentieth century provided a new and detailed insight into this circulation and mixing of the surface waters. Dramatic images of the stirring of the ocean by currents helped to quantify heat and mass transport around the globe, and also the horizontal mixing in the surface waters. However, the vertical mixing that enables the overturning of the waters and closes the global circulation loop is still poorly understood. New research led by Durham University has created new images of ocean structure in the vertical plane. For the first time oceanographers can visualise the spatial extent of the boundaries within the oceans and the processes that lead to vertical mixing.

The level of the talks will be aimed at a general audience to encourage everyone from undergraduates, non-science faculty and the interested general public to attend, and there will be time for questions following each lecture.

All IAS public lectures are free to attend.