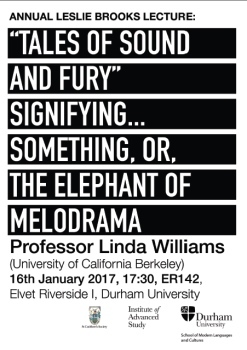 Annual Leslie Brooks Lecture: '“Tales of Sound and Fury” Signifying... Something, or, The Elephant of Melodrama'

Abstract
Melodrama has seemed a contradictory term. On one hand a special genre for suffering women, on the other hand a genre of blood and thunder action; on one hand failed tragedy, on the other the pathos of an age that seeks a hidden moral legibility. Melodrama is unruly; it is what Henry James, speaking of Uncle Tom’s Cabin, called a leaping fish that alights first in one medium then another but seems to continually eludes our grasp. Considered as a mode, not a genre it has been seen by many scholars to dominate not only the popular drama of the nineteenth century, but also Hollywood cinema and television. Peter Brooks’s pervasive notion of the “melodramatic mode” has given critics much to appreciate in melodrama beyond a failed aspiration to be tragedy. However, in Brooks’s schema, melodrama’s presumed "excess" has prevented it from being understood as the norm of popular entertainment, not its deviation. This paper argues for the normalization of the term melodrama as the major mode of popular stage, film and television and for the abolition of the term "classical" as an ahistorical, misleading misnomer.

Biography
Linda Williams teaches courses on popular moving-image genres. She has also taught courses on Oscar Micheaux and Spike Lee, Luis Buñuel and Pedro Almodóvar, melodrama, film theory, selected “sex genres,” and The Wire. Her books include Hard Core: Power, Pleasure and the Frenzy of the Visible/ (second edition 1999, University of California Press), Playing the Race Card: Melodramas of Black and White, from Uncle Tom to O.J. Simpson (2001, Princeton). She has edited a collection of essays on pornography, Porn Studies (Duke, 2004). Her most recent books are Screening Sex (Duke, 2008), a history of the revelation and concealment of sex at the movies and On The Wire (Duke 2014). She is currently editing an anthology on melodrama with Christine Gledhill called Melodrama Unbound.