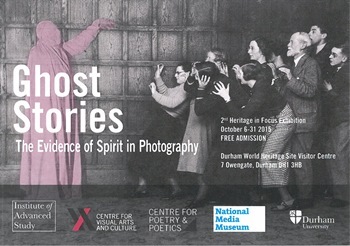 Ghost Stories - The Evidence of Spirit in Photography

2nd Heritage in Focus Exhibition, devoted to 'Ghost' photography; is taking place between 6th - 31st October 2015. All are welcome, and admission is free.

This small exhibition, devoted to ‘ghost’ photography, is linked to a public lecture series, ‘Ghosts: The Evidence of Spirits’, sponsored by the Institute of Advanced Study as part of the events organised under the 2015/16 theme ‘Evidence’. The exhibition has been prepared by Stefano Cracolici (Centre for Visual Arts and Cultures) and Mark Sandy (Centre for Poetry and Poetics), in collaboration with the National Media Museum in Bradford.

The first ‘ghost’ photographs were produced by accident and were a result of the long exposures required by the earliest photographic processes. If subjects moved during the exposure, they appeared in the finished photograph as a blurred, transparent, ghost-like figure. In 1856, the eminent scientist Sir David Brewster noted this unusual aspect of photography in his book The Stereoscope: Its History, Theory and Construction: ‘For the purpose of amusement, the photographer may carry us even into the realms of the supernatural. His art enables him to give a spiritual appearance to one or more of his figures, and to exhibit them as “thin air” amid the solid realities of the picture.’

Claims of capturing a spirit with the camera lens were made as early as the 1850s, when photography was relatively new to the world. At that time, the process of photography was mysterious enough to most people that the idea of a photograph capturing the latent image of a spirit seemed quite possible. By the time spirit photographs were being publicized in the 1860s, professional photographers had developed several techniques to portray ghost-like apparitions through composite images, double exposures, and the like. Initially, ghost photographs were produced solely as novelties and amusements and no attempt was made to present them as genuine spirit photographs.

The ease with which novelty ghost photographs could be made meant that the technique was soon abused by fakes and charlatans who used it to prey on the gullible and the vulnerable by taking ‘spirit’ photographs of their deceased loved ones, especially after the traumatic experience of WWI. Exemplary, in this respect, is an album of spirit photographs associated with William Hope and the ‘Crewe Circle’, unearthed in a second-hand bookshop by one of the curators of the National Media Museum in Bradford. We are pleased to display a large part of it at the World Heritage Site Visitor Centre, as part of CVAC’s (Centre for Visual Arts and Cultures) Heritage in Focus Exhibition Series.