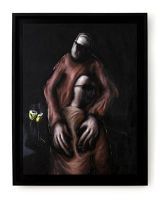 The Durham Institute of Advanced Study is exhibiting recent works of artist Chris Gollon from Thursday 8th November until Wednesday 5th December. The paintings can be viewed at the Institute on Tuesdays and Thursdays 1.00-2.00pm.


Chris Gollon is an established name in British painting. He exhibited at ART’97 Chicago, and has had 5 solo museum shows in the UK. In 1998, he exhibited with Yoko Ono, David Bowie and Gavin Turk in ‘ROOT’, a crossover exhibition of contemporary music and art created by Thurston Moore of Sonic Youth, at the Chisenhale Gallery, London. In 2000, Chris Gollon was commissioned by the Church of England to paint 14 Stations of the Cross for a grade-one listed church in London, designed by Sir John Soane. The series of paintings will be unveiled and installed permanently in St John on Bethnal Green next year. In 2001, the award-winning River & Rowing Museum in Henley-on-Thames, (with the aid of the Victoria & Albert Museum), purchased Gollon’s hinged triptych ‘Big Fish Eat Little Fish’, which now forms part of the permanent collection alongside works by Frink and Dufy. In 2004, Chris Gollon was invited to show in St Paul’s Cathedral with Bill Viola, Craigie Aitchison, Maggi Hambling and Tracey Emin. In 2005, the Huddersfield Art Gallery purchased a major work by Chris Gollon entitled ‘Einstein & The Jealous Monk’, which now hangs in the permanent collection alongside works by L.S. Lowry and Francis Bacon. In 2007, he accepted a commission from the River & Rowing Museum to paint the Henley Regatta. Unveiled in 2008, his painting will hang permanently in the museum’s collection in juxtaposition with Raoul Dufy’s ‘Regatta at Henley’. It will also be used by the RRM and various agencies to promote the 2012 Olympics. Further information may be found by visiting www.chrisgollon.com.