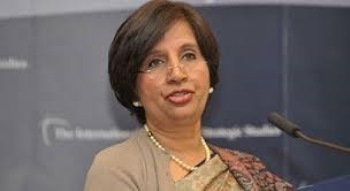 This sixth Annual King Hussein Lecture in Cultural Dialogue will explore the idea of Asia as envisioned by Indian thought leaders like Gandhi, Tagore and Nehru, and also the common concerns and interests that bind India not only with East and South East Asia but also with West Asia. Can one idea of Asia be forged out of the diversity of interests and concerns that populate different regions of the continent? Can India be a bridge between the different regions of Asia, can the promise of Asia be realized? Can politics, economics, trade and culture create an Asian identity that is rooted in the Asian landscape and is liberated from views imposed from the West?

We are honoured that the guest speaker for this annual lecture will be Nirupama Rao, the 2014 Meera and Vikram Gandhi Fellow at the Watson Institute, Brown University, USA. Nirupama Rao is the former Ambassador of India to the United States and, prior to this appointment, she served as the Foreign Secretary of India for a period of 2 years. During her long and distinguished career she has served in several capacities: as Minister of Press Affairs in Washington and as Deputy Chief of Mission in Moscow. On her return to New Delhi, she was designated as Joint Secretary and spokesperson for the Ministry of External Affairs, and was the first woman to hold this post. Her other ambassadorial assignments have included Peru, Bolivia, and Sri Lanka.

Nirupama Rao was born in Malappuram, Kerala. She undertook her schooling in a number of various cities including Bangalore, Pune, Lucknow, Coonoor. She completed her BA (English) Honors at Mount Carmel College, in Bangalore in 1970 when it was affiliated with the Bangalore University. Later, she obtained her Master’s degree in English Literature from what was then known as Marathwada University in Maharashtra. She topped the All India Civil Services Examination in 1973 and joined the Indian Foreign Service.

On completion of her training in India, she served in the Indian Embassy in Vienna in the mid-seventies. She did a stint as First Secretary in the Indian High Commission in Sri Lanka from 1981-83. During her early years in the Ministry of External Affairs, she specialized in India's relations with China, and was a member of the delegation of Prime Minister Rajiv Gandhi when he made his historic visit to Beijing in December 1988.

Rao was a Fellow at the Weatherhead Center for International Affairs at Harvard University in 1992-93 where she specialized on Asia-Pacific Security.

She served in the Indian Embassies in Washington and Moscow as Minister and Deputy Chief of Mission, respectively. Her first Ambassadorship was to Peru with concurrent accreditation to Bolivia in 1995-1998. She became the first woman spokesperson of the Ministry of External Affairs in 2001. She was assigned to Sri Lanka as High Commissioner for India in 2004. In 2006, she became India's first woman Ambassador to China. She became India's Foreign Secretary, succeeding Shivshankar Menon, on 1 August 2009.

On 21 December 2010, the Indian Government approved the extension of her tenure as India's Foreign Secretary until 31 July 2011.

Nirupama Rao was conferred the degree of Doctor of Letters (Honoris Causa) by the Pondicherry University at their Convocation in May 2012. She has also been named to the global list of the One Hundred Most Influential Women on Twitter by Foreign Policy.com

She has also written a book of poetry, Rain Rising and her poems have been translated into Chinese and Russian. A Malayalam translation was also released by Calicut University in June 2013.

On the completion of her tenure as Ambassador of India to the United States in November 2013, Brown University announced that Nirupama Rao would be the Meera and Vikram Gandhi Fellow in residence at the University during 2014. She is engaged in research and writing on select foreign policy issues during this period.

Booking Details
Booking is essential for this event. If you would like to attend please confirm your attendance and that of any guest you wish to bring, with Judith Aird at Event Durham by either email (judith.aird@durham.ac.uk) or by telephoning 0191 334 2884. Alternatively register online at: https://www.dur.ac.uk/conference.booking/details/?id=386

Venue
The lecture will commence at 6.15pm, in the Rosemary Cramp Theatre in the Calman Learning Centre. Please be aware the venue will not be accessible until 6.00pm.

Map – The Calman Learning Centre is denoted at
building number: 43.