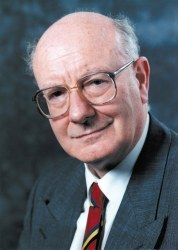 The emergence of complexity in human society is difficult to define, but easy enough to discern in the archaeological record. Although our species has been around for more than 100,000 years, permanent settlements began only 12,000 years ago, the first cities some 6,000 years ago, and state societies developed in many parts of the world in the succeeding millennia. The development of complex society in the Aegean will briefly be compared with the analogous process in Egypt, Sumer, China, the Indus, Mexico and Peru in an attempt better to understand the emergence of complex social behaviour.

Colin Renfrew (Lord Renfrew of Kaimsthorn) was lecturer in Prehistory and Archaeology in Sheffield and Professor in Southampton before serving as Disney Professor of Archaeology in Cambridge from 1981 to 2004, where he was founding Director of the McDonald Institute for Archaeological Research. He was the recipient of the Balzan Prize in 2004. He has directed excavations in the Orkney Islands and in Greece, and is the author of The Emergence of Civilisation (1972) and other works including Prehistory: the Making of the Human Mind (2007).