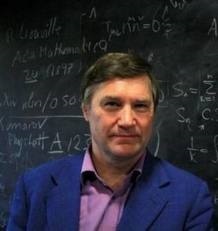 Stop some particle physicists in the street and they will soon be trying to persuade you that the world is altogether simple and symmetrical. But stop a biologist, an economist, or a social scientist, and they will tell you quite the opposite: the world is a higgledy-piggledy collection of complexities that owes little to symmetry and displays precious little simplicity. So who is right: is the world really complicated or is it simple?

John D. Barrow FRS is Professor of Mathematical Sciences at Cambridge University and Director of the Millennium Mathematics Project, a programme to improve the teaching, learning and appreciation of mathematics and it applications. He is a Fellow of Clare Hall College, Cambridge. He has also recently been the Gresham Professor of Geometry at Gresham College, London and formerly the Gresham Professor of Astronomy. His research interests are in cosmology, gravitation physics and the interface between particle physics and astronomy.

He has received many awards, including the 2006 Templeton Prize, the Royal Society’s 2008 Faraday Prize, the 2009 Kelvin Medal of the Institute of Physics and the 2012 Zeeman Medal of the London Mathematical Society and the IMA. He is a Fellow of the Royal Society and a member of the Academia Europaea. He has written more than 495 scientific papers, and 22 books, translated into 28 languages, together with many popular science articles. His recent books include Cosmic Imagery about the role of pictures in the history of science, 100 Essential Things You Didn’t Know You Didn’t Know about Sport about mathematics and sport, and The Book of Universes. His play, Infinities, won the Italian Premi Ubu for best play in the Italian theatre in 2002, and the 2003 Italgas Prize.