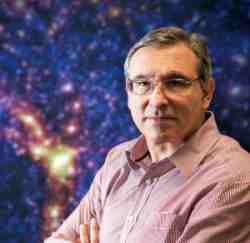 The Light Year Public Lecture Series - From Darkness to Light: Everything from Nothing

Light was first able to escape the fog of the Big Bang when the Universe was about 350,000 years old. This first light has been propagating freely ever since and is detected today as a background of cold, microwave radiation. The cosmic radiation gives us direct information about the early universe and allows cosmologists to confront some of the most fundamental questions in the whole of science: How and when did our universe begin? What is it made of? How did galaxies and other structures form? Using information extracted from the background radiation, it is possible to recreate, using large supercomputers, the evolution of the entire universe and thus relate processes occurring near the beginning to observations of the universe today. A coherent picture of cosmic evolution, going back to a tiny fraction of a second after the Big Bang, is beginning to emerge. However, fundamental issues, like the identity of the dark matter and the nature of the dark energy, remain unresolved.

Biography
Carlos Frenk is the Ogden Professor of Fundamental Physics and Director of the Institute for Computational Cosmology at Durham University. He is one of the originators of the "Cold dark matter" theory for the formation of cosmic structure. He specializes in supercomputer simulations of the evolution of the universe. Professor Frenk has published over 400 scientific papers and is one of the most cited authors in the literature. He was elected Fellow of the Royal Society in 2004 and has received various prizes, including the Royal Society Wolfson award, the Hoyle medal, the George Darwin Prize and the 2011 Gruber Cosmology prize. He features regularly on radio and TV.

The venue for this series is the Calman Learning Centre. Directions can be located at here. Alternatively on the University map, the CLC is denoted at building number: 43.