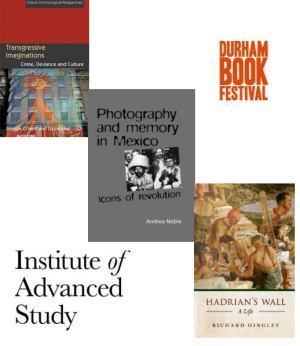 Writing in the University requires a particular set of skills and is shaped by some very particular pressures.  Academic authors need to present original research, to respond to the cut and thrust of peer reviews, to engage in scholarly debate with colleagues, and to be accessible to wider audiences.  What is it like to write in this context?  Find out by meeting a range of University authors at these events.

Hadrian’s Wall: a life explores the life of Hadrian’s Wall from the second century to the time of the internet, drawing upon several studies of the living history of the monument.  This book arises out of the major cross-disciplinary research project ‘Tales of the Frontier’, funded by the Arts and Humanities Research Council from 2007 to 2009. It provides a significant study of the reception of the Wall from the second to the twenty first century

Professor Richard Hingley is Professor of archaeology at Durham University.   His current research focuses on transforming knowledge of Rome, addressing several distinct topics including genealogy of changing meanings of ‘empire’ from the classical Roman past to the present day, Roman identity and social change, ancestral histories and the role and nature of studies of Frontiers from the classical past to the present day.

Photography and Memory in Mexico traces the life stories of some of the famous photographic images made during the 1910 revolution, which have been repeatedly reproduced across a range of media in its aftermath. Which photographs have become icons of the revolution and why these particular images and not others? What is the relationship between photography and memory of the conflict? How do we construct a critical framework for addressing the issues raised by iconic photographs? Placing an emphasis on the life, afterlife and also the pre-life of those iconic photographs that haunt the post-revolutionary landscape, Andrea Noble approaches them as dynamic objects, where their rhetorical power is derived from a combination of their visual eloquence and their ability to coordinate patterns of identification with the memory of the revolution as a foundational event in Mexican history.

Andrea Noble is a Latin Americanist with research interests in visual culture studies - particularly film and photography - and Mexican cultural history. Her work to date has engaged with a range of methodological approaches, including those derived from feminist and gender studies, cultural memory, history of the emotions, reception and spectatorship, semiotics, and visual anthropology.

Taking the notion of transgression – the breaking of boundaries – as its starting point, this book brings a fresh approach to cultural criminology by exploring representations of the transgressive in fictive texts and ethnographic research. Chapters focus on topics of urgent contemporary interest, including school shooters, violent female avengers, sex workers, those labelled 'mad', serial killers, asylum seekers and skid row residents. The book is interdisciplinary in scope, blending insights from film and media studies, literary criticism and psycho-social analysis with cultural criminology. It also presents cutting edge, participatory arts-based ethnography carried out in the UK and Canada.

Professor Maggie O'Neill is Principal of Ustinov College and Professor in criminology at Durham University.Maggie has extensive experience of working in inter-disciplinary contexts with expertise in critical and cultural criminology. Research activity and outcomes include the development of theory; a focus upon innovative biographical, cultural and participatory research methodologies; and the production of praxis - knowledge which addresses and intervenes in public policy. Her research has been instrumental in moving forward debates, dialogue and scholarship in three substantive areas: prostitution and the commercial sex industry (since 1990); forced migration and the asylum-migration nexus (since 1999); innovative participatory, performative and visual  methodologies (since 1990).  Her previous publications include Sex Work Now (co-edited with R. Campbell), Prostitution and Feminism, Prostitution: A Reader (co-edited with R. Matthews), Asylum, Migration and Community and Adorno, Culture and Feminism.