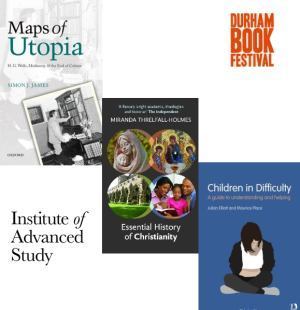 Writing in the University requires a particular set of skills and is shaped by some very particular pressures.  Academic authors need to present original research, to respond to the cut and thrust of peer reviews, to engage in scholarly debate with colleagues, and to be accessible to wider audiences.  What is it like to write in this context?  Find out by meeting a range of University authors at these events.

Professor Joe Elliott; 'Children in Difficulty: A guide to understanding and helping'

This book discusses some of the most common, yet incapacitating, difficulties that are frequently encountered by young children and adolescents. It includes new insights from the fields of genetics and neuroscience and ensures claims for the effectiveness of specific interventions are supported by rigorous, scientific evidence. By drawing upon high level scientific and clinical knowledge and distilling it in a way that is accessible to professionals from a range of child care disciplines, this book will be of significant value to those working in education, health or social care, and anyone who needs to be able to recognise and help children in difficulty.

Professor Joe Elliott is Principal of Collingwood College, Durham University and Professor of Education.  He is a Chartered Psychologist and Associate Fellow of the British Psychological Society and is registered to engage in clinical practice as an educational psychologist by the Health Professions Council. He is an Academician of the Academy of Social Sciences and a member of the REF 2014 Education Panel.

His research and teaching interests include dyslexia, achievement motivation, working memory difficulties, SEN, behaviour management, cognitive education, and psychological assessment. A former Associate Editor of the British Journal of Educational Psychology, he is currently a member of the Editorial Boards of several journals including the British Educational Research Journal, Learning and Individual, Differences and Comparative Education.

The Revd Dr Miranda Threlfall-Holmes; 'The Essential History of Christianity'

In this book, Revd Dr Threlfall-Holmes displays a breathtaking mastery of the broad sweep of history. This entertaining and fast-paced account takes in 2,000 years of Christianity around the globe, analysing not just what happened, but why. Revd Dr Threlfall-Holmes demonstrates that the Christian faith has always developed in conversation with, and in response to, the societies and cultures in which it is set. Economic, political and social influences are given due weight alongside theological debates and church politics in explaining how and why Christianity has taken the forms that it has – for good or ill.

The Revd Miranda Threlfall-Holmes is Chaplain and Solway Fellow of University College, Durham. She has first class degrees in history from Cambridge, and theology from Durham, and her doctoral thesis about Durham Cathedral Priory was published by OUP. She was a curate in Newcastle before her present post, and has been involved in ordination and lay theological training in Durham and Newcastle Dioceses for several years. She is the author, with Mark Newitt, of Being a Chaplain (SPCK, 2011).

H. G. Wells is one of the most widely-read writers of the twentieth century, but until now the aesthetics of his work have not been investigated in detail. Maps of Utopia tells the story of Wells's writing career over six decades, during which he produced popular science, educational theory, history, politics, prophecy, and utopia, as well as realist, experimental, and science fiction. This book asks what Wells thought literature was, and what he thought it was for. H. G. Wells formulated a literary aesthetics based on scientific principles, designed to improve the world both in the present and for future generations. Unlike Henry James, with whom he famously argued, Wells was not content simply to let literary art be, for its own sake: he wanted to make art instrumental in improving the lives of its readers, by bringing about the founding the World State that he predicted was man's only alternative to self-destruction. Such a project differed radically from the aims of Wells's late-Victorian and his Modernist contemporaries - with consequences for the nature both of Wells's writing and for his subsequent critical reception.

Simon J. James is Professor in Victorian Literature at Durham University. He is the author of Unsettled Accounts: Money and Narrative Form in the Novels of George Gissing and of work on Charles Dickens, H. G. Wells, and Edwardian fiction. He has edited four Wells novels for Penguin Classics, and is the current editor of The Wellsian, the scholarly journal of the H. G. Wells Society.  His latest book about Dickens will be published in 2013.