Despite COVID-19, the IAS plans to hold a full programme of virtual lectures and seminars. Further events will be added to this page as they are scheduled. 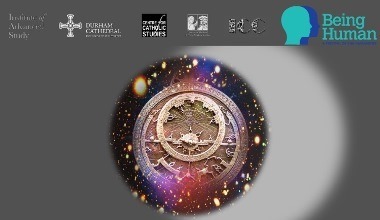 Being Human: a festival of the humanities - From the Dark Ages to Dark Matter: Modern Encounters with Medieval Science

‘From the Dark Ages to Dark Matter’ presents to the public questions central to the human condition: how was our world formed, how to explain the world around us, how we fit into this world, what it is to be human. Chaired by popular science author, Michael Brooks, the event takes the form of an interactive, multi-media, day-long public workshop, to take place in Durham Cathedral. The workshop presents original, interdisciplinary research between humanities scholars and modern scientists into the work of an extraordinary thinker from the thirteenth century. He was Robert Grosseteste, later bishop of Lincoln, whose response to questions which find us at our most human, who are we, why are we here, how do we relate to the natural world around us, made him one of the most dazzling and imaginative minds of his generation.

Who are we? Why do we exist? What is the universe?

Explore these fundamental questions in an encounter between medieval and modern science, through the writings and imagination of the famous medieval scientist Robert Grosseteste (c.1170-1253). Enjoy a day-long workshop on 18th November at Durham Cathedral, with medieval specialists and modern scientists, and unlock the secrets of the medieval universe, the medieval ‘big bang’, and the explanation for the rainbow. Popular science journalist Michael Brooks will chair the day, and give a public lecture on the lessons of medieval science to the modern day at Ushaw College on 19th November.

Grosseteste in a nutshell

Scholar and polymath, Grosseteste played an active and important role in academic, church and political life in England in the first half of the 13th century. Born around 1170, he was later tutor to the Oxford Franciscans from 1228, and then Bishop of Lincoln 1235-1253. One of the first western scholars to grapple with newly translated texts of Aristotle which were to be so influential on western thinking, Grosseteste was a thinker of powerful independence and creativity. He was also a fierce church reformer, involved in the politics of post Magna Carta England, a musician, theologian and administrator.

Collaboration and the meeting of minds

The event showcases collaboration between medieval specialists, in history, philosophy, ancient and medieval languages, medieval literature and hand-writing, and modern scientists, physicists, colour-vision experts, cosmologists, physiologists and mathematicians, developed at Durham and Oxford universities, with international partners, to bring all aspects of Grosseteste’s investigations to life. The Ordered Universe project creates a forum in which modern science engages with medieval thought with surprising and important results. We are able to present 13th century science in its own terms, to explore its mathematical intricacies, its axioms and its methods: enabling a clearer explanation of the past. We are also able to pose questions to modern science and modern culture about the relationship between fields of study, questioning our own certainties, and providing a longer, healthier perspective: what, for example, will investigators of the next millennium make of Dark Matter? How will they approach what is to be human within the universe?

The event will introduce the collaborative team and Robert Grosseteste to the general public in a series of innovative activities organised into four sessions, two morning and two afternoon. Following presentations by the research team, group reading of some of the treatises will show how Grosseteste explores being human in his world, how he is drawn to 3-dimensional description and thinking, to allow the general public to experience his thought in his own words. We will then conduct hands-on recreation of the some of experiments Grosseteste describes, and discuss and debate their application. A final session will present a computer-generated visualisation of Grosseteste’s cosmological scheme ‘The Medieval Cosmos’, made in collaboration with the Department of Interactive Media at the University of York.

Working together, with Grosseteste, and with you

We hope that this event will be intriguing and exciting: it is a partnership between various departments, centres and institutes in Durham, and outside. It and the research it showcases are founded on connectivity and translation. How different specialisms and groups of experts come together to make a far greater whole, is essential to the research. Humanities and Sciences are revealed as engaged jointly in issues impactful and relevant to our modern lives: engaged in contextualising, framing and translating essential questions for human activity and thought, from culture to culture, be that from past to present, within modern cultures, and between different linguistic and aesthetic schemes, from the verbal to the mathematical. Grosseteste is an archetype for holistic learning: scientist, preacher, administrator, politician, poet and musician, he is exemplary of an encompassing attitude towards knowledge, and a guide to how to hold the role of humanities within the compass of daily experience.

The Ordered Universe Research Team at the Festival

To find out more about the Ordered Universe Project please visit our active blog: www.ordered-universe.com

Introductions talk, who was Grosseteste, why should we know more about him, why is his story so important? Why is medieval science so interesting?

Reading Medieval Science: public readings of the text with explanation and commentary from various members of the team

How to do medieval science: interactive exposition of experiments led by Brian Tanner (Physics)

The Medieval Big-Bang: the film, how we made it and the premier