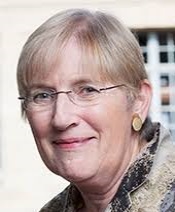 Helen Watanabe-O’Kelly is Professor of German Literature in the Faculty of Medieval and Modern Languages at the University of Oxford. She is a Leverhulme Emeritus Fellow and Emeritus Fellow of Exeter College.

Her main research interests are in German literature and culture from the late 15th to the early 18th centuries within their European context, in women’s writing in all periods and in the representation of women in German literature and culture. She has made a special study of early modern court festivals of all kinds throughout Europe and of court culture. Her most recent book is Beauty or Beast? The Woman Warrior in the German Imagination from the Renaissance to the Present (OUP 2010). She is the Project Leader of ‘Marrying Cultures: Queens Consort and European Identities, 1500-1800’, one of the 18 projects funded by HERA (Humanities in the European Research Area) as part of its ‘Cultural Encounters’ programme. The project involves collaboration with colleagues in Germany, Poland and Sweden. She is a Fellow of the British Academy.