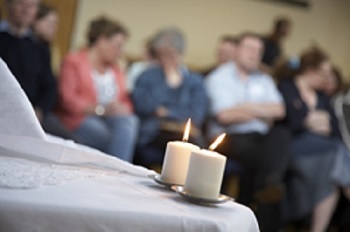 What is Holocaust Memorial Day?

Holocaust Memorial Day (HMD) is a time to remember the millions of people murdered during the Holocaust, under Nazi Persecution and in the genocides which followed in Cambodia, Rwanda, Bosnia, Darfur and elsewhere.

The aims of HMD are laid out in the statement of commitment. It was created on 27 January 2000, when representatives from 46 governments around the world met in Stockholm to discuss Holocaust education, remembrance and research.

At the end of this meeting, all attendees signed a declaration committing to preserving the memory of those who have been murdered in the Holocaust.

Holocaust Memorial Day is a time when we seek to learn the lessons of the past and recognise that genocide does not just take place on its own - it’s a steady process which can begin if discrimination, racism and hatred are not checked and prevented. We are fortunate here in the UK, as we are not at immediate risk of genocide. However, discrimination has not ended, nor has the use of the language of hatred or exclusion. There is still much to be done to create a safer future, and HMD is an opportunity to start this process.

Each year thousands of activities take place for HMD, bringing people from all backgrounds together to learn lessons from the past in creative, reflective and inspiring ways. From schools to libraries, workplaces to local authorities, HMD activities offer a real opportunity to honour the experiences of people affected by the Holocaust and genocide, and challenge ourselves to work for a safer, better future. 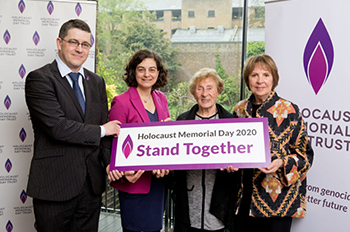 HMD theme for 2020: Stand Together

This year’s theme explores how genocidal regimes throughout history have deliberately ruptured societies by marginalising certain groups. It also highlights how these tactics can be challenged by individuals standing together with their neighbours and by speaking out against oppression.

Today, there is increasing division in communities across the UK and the world. Now more than ever, various communities need to stand together in order to stop discord and the spread of identity-based hostility in our society.

Various events (that are free to attend) will be taking place across County Durham. This includes the opportunity to hear from Gabriele Keenaghan, who will tell the story of how her grandmother secured her a place on a kindertransport train from Austria to the UK. Gabriele was recently awarded the British Empire Medal by the Queen for her services to Holocaust education and awareness. For further information about HMD events taking place in County Durham, please click here.

The International Holocaust Remembrance Alliance has provided a number of examples of modern-day antisemitism. According to them, taking into account the overall context, antisemitism could include, but are not limited to:

Anyone can also report antisemitic incidents through the Community Security Trust, a charity that protects British Jews from antisemitism and related threats.