As part of our Black History Month features, we are getting to know some of our colleagues from different parts of the University. As we explore and read through various compelling stories and photos of remarkable black individuals here in the UK and abroad, we would like to hear our colleagues’ own inspiring stories as well as know more about their take on Black History Month and its significance today.

Thank you very much to Dagou, Adriana and Lana for sharing their stories with us. 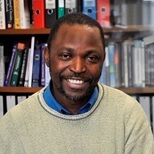 He may be thousands of miles away from his home country, Côte d'Ivoire(Ivory Coast), but for Professor Dagou Zeze, staying close to his roots has always been key to what he has accomplished so far. Born in a small village - Lagouata (a mile west of Bayota), Dagou talks about how his family and humble beginnings fuelled his passion for learning.

“I’m the only one who went to university. My mother was not educated, she never went to school. My father did go to school, but not very far, just primary school; and so, going to school, for me like many other kids in the village, was never straightforward. However, I enjoyed it very much rather than working in the crop fields.

“You may be wondering – so why engineering? In a village where there was no running water and electricity or other facilities taken for granted in Europe, we had to use a petrol lamp or a torch for lighting. We’d get a piece of bamboo to hold many ‘recovered’ batteries on it, trying each one until enough light was produced – as a child, I was interested to know what made this torch light, how it works, find out a bit more about electricity and physics, and the rest followed naturally.”

From secondary school to University, the friendly competition among Dagou and his peers pushed him to achieve more and be ahead of the game. Behind his competitive streak though was a sense of modesty and quiet benevolence.

“We were happy for each other if one of our friends was top of the class. But we used this too as a motivation to do well. At the end of the semester, there was an incentive. Whoever gets high marks consistently would have his or her photo posted on the school’s display board of achievement: ‘Tableau d’Honneur’. So when you are on the board, you don’t want to be taken off it.

“Early on, this made me think how I could position myself without crushing everyone else—my friends. At present, I am still in contact with most of them. I guess, we all had one thing in common - most of us came from a poor background, from the villages, not from the towns. There was no role model, nothing else was driving us forward other than ourselves.”

As with most of his peers, there was also a strong need to maintain their government scholarship, their golden ticket—from secondary school through university for as long as they were doing okay. It was also through a scholarship that he was able to pursue postgraduate studies (Master’s and PhD) in France.

For an aspiring professional scientist, he felt that fluency in English was a necessity. As such, undertaking a postdoctoral research in an English-speaking country would be very beneficial. He therefore took up a post in Northern Ireland, before later moving to Surrey and then, finally, Durham.

Dagou initially joined Durham University as a fixed term lecturer in late 2003. Despite an unsuccessful application for an EPSRC Advanced Fellowship in 2007, his talent and potential did not pass unnoticed. He soon earned a permanent role, and eventually, he took full advantage of this opportunity to propel himself up the academic ladder. In 2015, he was promoted to Professor. For him though, a promotion is just a starting point, and no excuse for complacency.

“I still work long hours to get things done properly. I’ve always thought that I’m not smarter than the rest; that’s why I have to work much harder. I would ask myself - What is the next step? What can I do to make a contribution and make a difference? There is no limit to what you can do as long as you’re willing to work hard and to improve continuously.”

Similarly, his personal success did not thwart his connections with his homeland, where political unrest has been a constant problem for more than a decade now, including his village being burnt down with casualties, legacy of which is still present as a stark reminder of the value of life and peace. As Dagou sees it, knowing and valuing one’s roots, supporting his family (both here in the UK and in Ivory Coast) and having a strong bond with them, remain to be his ultimate source of motivation.

“This makes you see life differently, it makes you appreciate what you have. You know how people close to you but also from the other side of the world live. This makes you focus on things that are essential. You prioritise, you look at the bigger picture. It is our social responsibility to provide as much support as possible”.

For Dagou, small acts help achieve a greater cause; so when asked about his thoughts on Black History Month, he feels that more attention should also be given to people who are less known but who have helped shape the civil rights movement, particularly those who chose a more peaceful way of protesting.

“We have a lot of small people who haven’t been recognised, who have done small acts that have made a huge difference.”

As he views it, in the same way that he has been motivated by reflecting on his own life struggles and the people he has met along the way, learning from the stories of these incredible individuals could be a great way of honouring them. For Dagou, this is a more profound way of celebrating Black History Month.

“It’s all about appreciating the contributions of these people, how they have changed society through the power of a strong argument. Now you can apply for a job with the knowledge that there are a lot of people out there who will not look at your colour or origin— for me that is very significant. Nevertheless, you cannot allow yourself to be average. You must believe in yourself and most significantly, make the most of your opportunities”.

What led you to your current role?

Adriana: I am originally from Venezuela. While living in Caracas I was working for a large American corporation, and I was offered a job in Newcastle in 2004 in the area of Employee Services as part of an organisational restructure exercise. The company relocated me to the North East under a permanent contract. Once transferred here on my own, I worked as a Systems Implementation and Technology Project Manager for several years. I had the chance to work in projects that took me around a large part of the world. And although that was exciting, I had to be away from my family. I always had a lot of respect for Durham University and then I saw the job advert.

As a Business Analyst I have a chance to use my previous experience in requirements analysis and business engagement. I enjoy having the opportunity of engaging with people and finding out what they want or makes them tick for then helping them to figure out what they really need. I also enjoy the variety of the projects and assignments I work on. Every day is different. I have been in the University for 3 years now and I have the chance every day to work with members of the Research, Academic and PSS departments thanks to my role. So I love the fact that my job gives me the opportunity to interact with so many people from so many different background and roles, and understand how functions fit together.

I applied originally looking for a better work-life balance after a demanding and stressful job in the private industry which kept me away from home on a regular basis. Now walking through the campus between meetings and meeting so many interesting people who are working in fantastic, world changing projects and ground breaking initiatives I feel more than ever that I made the right professional choice.

Lana: My mother recounts that I was an avid reader from the age of three – I can’t quite remember this. Nonetheless, from reading, I became very interested in transferring knowledge, as I call it know but simply teaching anyone anything. As a result, I had created a home classroom to subject any willing (or most unwilling) participants to my primary school learning. As I grew older, I was involved in teaching at church and other voluntary programmes, including remedial programme for students in the summer vacation. However, on entering law school, I had planned a life in practice. During my second year, after being recognised for academic excellence, I was encouraged by my university professors to consider academia. It was at that point that my two areas of interest, teaching and law, collided. And the rest was history.

What do you love doing most in your free time?

Adriana: Teaching Zumba fitness classes several evenings a week – dancing makes me happy; listening to music – any kind; reading – I love getting lost in a good story; singing blues & jazz – amateurishly but passionately; and travelling – that would be my dream job, travelling and review restaurants all over the world.

Lana:I enjoy church, gardening and traveling the world with my husband.

Can you tell us about any significant black figures who have inspired you in your career or in your life?

Lana: My mother, who passed away over the summer, is one of the foremost black figures that inspired my career and life achievements to date. She persevered against the odds and achieved the historic feat, and though being of Afro-Caribbean heritage, was the first woman to serve as the Head of the Postal Affairs in my home country of Barbados. At home, when my sister and I were younger, she taught and reminded us of many black investors and showed us, by precept and example, how we could empower ourselves to overcome obstacles in every shape and form. She encouraged perseverance in dreaming, conceptualising, pursuing and ultimately achieving whatever we desired.

What’s the significance of black history month for you?

Adriana: It reminds us how far black people have come but also how much longer we need to go to achieve true equality. We want to be equals, not be tolerated or treated as a charity case.

Lana: Often, there is so much negativity regarding black culture but I have found that, when opportunities like these present themselves, there is so much to learn regarding black history and how it has shaped life, as we know it. I enjoy the features across the various media outlets, which speak to African history and cuisine. It provides a time for reflection and celebration of the lives of those who were discredited simply because of the colour of their skin, along with those who fought to secure the liberties, which I now enjoy (and sometimes take for granted). It also gives me an opportunity to reflect on how, by positively contributing to the development and progress of society, I can operate to curb negative stigma or stereotypes against black academics, students or the race as a whole.