In 2018, as part of our Black History Month (BHM) programme, colleagues from across the University have sent in their contributions for our virtual BHM Inspiration Wall. As you will see, the individuals included in this wall come from different walks of life, from varying industries and from different parts of the world.

In creating this online wall, we aim to recognise and celebrate the inspiring stories and astonishing achievements of various black individuals throughout history.

A huge thank you to everyone who has contributed to this wall!

“I think singer-songwriter Joan Armatrading is inspirational because apart from her distinctive voice and sheer talent, she was known for being the first ever female British artist to be nominated for a Grammy in the blues category. I also think her style and music have always been consistently amazing and self-assured. As aptly described by the New Republic, her fame is the type that burns intensely at its own level, never blowing up to cheap levels that would allow her to fill stadiums by peddling nostalgia.”

“Born in Birmingham in 1947, Elizabeth identifies as of Irish/Nigerian heritage and started work for the NHS as a school nurse assistant in Wolverhampton at the age of 16. She was inspired to become a nurse at age four because a wonderful nursing nun treated her childhood eczema in an expert and sensitive manner. Elizabeth put a substantial amount of her life into her work as a nurse, health visitor and tutor working with black and minority ethnic communities in London.

In 1979, she helped establish in the London borough of Brent the first UK Sickle & Thalassemia Screening and Counselling Centre; and in 1999, she became Head of the Mary Seacole Centre for Nursing Practice at the University of West London until her retirement in 2007. The university honoured her with the award of Emeritus Professor of Nursing. In 2001, she was awarded a CBE for services to nursing; and in 2004 she was presented with the Royal College of Nursing Fellowship (FRCN) for her work in the development of nurse-led sickle cell and thalassemia counselling services and education and leadership in transcultural nursing.

Elizabeth was honoured with a Damehood (DBE) in the 2017 Queen’s New Year’s Honours List for her services to nursing and the Mary Seacole Statue Appeal. The Queen’s Nursing Institute awarded her a Fellowship (FQNI) in October 2017.”

“Aaron Davis is the real name of Manchester grime MC Bugzy Malone. He is an inspiring character because of the way he has approached his rap career and the success he has achieved in spite of difficulties he has faced, especially struggling with neglect and abuse as a child. Aaron hasn't compromised to get fame in the rap industry. His lyrics are most usually seeking to address real social issues and open up vulnerably about pain and struggle that has personally affected him. He hasn't got a record label so all his work and promotion is what he's had to work hard for himself. Davis inspires a generation of less privileged young people to approach life with a humble, yet tenacious attitude and has inspired us to see the potential that rap as a platform has for spreading positive messages rather than the negative ones that the genre is often criticised for.”

“I find him inspiring because of his progressive ideas and his tireless advocacy for the rights of the oppressed. Accordingly, he believed that being black and being American could be conceived ‘as leading neither to assimilation nor separatism but to proud, enduring hyphenation’; which meant that one could be both black and American at the same time. Known as being the greatâ€‘greatâ€‘grandson of a slave, Du Bois was also the first African American to earn a PhD from Harvard University.”

I think Jamaican-born Stuart Hall, deserves to be in the inspiration wall for his significant contributions in the area of cultural studies. Often referred to as ‘the godfather of multiculturalism’, he was a one of Britain’s leading intellectuals and political campaigners.

“I first heard Jimi’s music when I was 8 years old and even back then I was at awe. I would describe his music and lyrics as raw beautiful poetry. His commitment to his music was amazing and inspiring too. For instance, even as a left-handed, he managed to learn how to play a right-handed guitar, which was incredible. He may not have been the perfect role model; but as a musician, his passion and talent were like no other, particularly during his time.”

“Her poetry and activism just woke me up to what is now called the Black Lives Matter movement - but back in the 1980s. An amazingly articulate and out Black bisexual woman with fire and compassion at her core.”

“For me, Kaepernick’s act of kneeling during the American national anthem (in the 49ers’ fourth and final preseason game of 2016), was such a courageous act; and I think that it was a modern way of peaceful protesting. Nowadays, it is very easy to become apathetic; so having someone as famous and established as Kaepernick challenging the status quo, was nothing but inspiring.”

“Doreen may have made the news due to the tragic death of his son, Stephen Lawrence—who was murdered in a racist attack in South East London in 1993, but it was her determination to seek justice and bring about change in the police service (in the years following her son’s death) that I find truly inspiring.”

“She may not be as prominent as other civil rights activists during her time, but she has actually contributed significantly to Britain’s black power movement. Also, although she left school without qualifications, she was able to win a place to study at Manchester University and helped establish Black Women's Mutual Aid and the Manchester Black Women's Co-op.”

“This began when I was into my teens and growing up in the mid-late 70’s, in a small mining/rural community in North Durham where I still live today. I started to listen to the usual music on Radio One or whatever Top of the Pops was churning out on a Thursday night, that’s about all there was to listen to back then. I never “got” the popular artists or groups of that time, mainly because I had nothing in common with them with their long hair, flares and sequins, and they just seemed to sing along to really long boring tunes, not lyrics that meant anything to me anyway.

Around 1976-77 a few of us, in our last couple of years of comprehensive school by this time, started to become excited by the emergence of PUNK ROCK. Mainstream BBC radio wouldn’t play this music but then I heard about the semi-pirate station Radio Luxembourg, beaming from its own transmitter right into the UK. They played the latest punk songs as quick as they came out on vinyl, Sunday night was always the best time to listen. However they also played a selection of alternative music, many genres, including obscure reggae tracks mainly from Jamaica. Tunes the BBC wouldn’t dream of broadcasting.

That’s when I first hear Junior Murvin. The track was called “Police and Thieves”

At the time I didn’t really understand the lyrics because they were mainly sung in Jamaican “street talk”. The singer had a high pitched voice and laid back delivery, it sounded upbeat but he was obviously singing about something he wanted to say. I knew it wasn’t a love song.

There were a lot of issues in the UK in the late 70’s with racial tension especially in London. The Notting Hill carnival of 1976 descended into violence. As it did in following years. I remember media coverage at the time implying that black people were at fault, that the violence being shown on TV was only caused by them. The truth was the black community had had enough. Being subjected to “sus”, a law where police had the right to stop and search anyone they suspected of anything at all, and targeting black people in particular, increased racial tension. This was also a time when black communities were pushing back against the right wing groups who seemed to be growing in numbers. Apparently Junior Murvin’s song was being played all over London. A kind of anthem.

Would I have taken any notice of what was going on in London and other cities if I hadn’t discovered Junior Murvin? I’m not sure to be honest, but about this time I did attend a Rock against Racism gig at Newcastle’s Guildhall on the Quayside with my pal John Wilkinson.

That night it did blow up big time, National Front supporters got in to the gig followed by the police and there was a lot of violence, a lot of fighting with glasses and bottles being thrown and the police lashing out at anyone and everyone. I saw a skinhead with an ice pick, a lot of people got hurt, strangely not many seemed to get arrested. But that night brought things closer to home. Things I had only associated with London.

So fast forward a good few years when it became a bit easier to obtain information. Junior Murvin had always sang from being a young man, eventually recording a few tracks. He began performing in the hotels and clubs of the Jamaican holiday resorts singing what customers wanted to hear at the time, safe songs, covers of American soul and watered down reggae. However he ditched the tourist dollar to sing about what was going on around him. Everyday things that were affecting him, his family and friends.

I guess he could have chosen an easier life but he had something to say, took a chance and decided to say it. Being true to himself. Good for him. So how do I find him inspirational?

“I think Michelle is inspiring because she led initiatives focusing on girls pursuing education.”

“Personally, I think Michelle Obama was an inspirational First Lady (in the US), if not the best. The level of work she has done has been phenomenal. For example, in 2010, she launched Let’s Move!, which brought together community leaders, educators, medical professionals and parents in a nationwide effort to address the challenge of childhood obesity. They had an ambitious goal: to solve the epidemic of childhood obesity within a generation.” 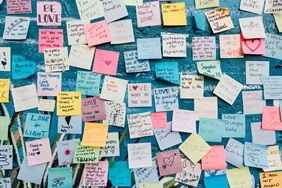