Our Current and Recent Research Students

We host a thriving postgraduate community. The profiles of some of our current research students can be found below; some of our researchers can also be found on Twitter. Our PhD graduates produce theses across a wide range of fascinating topics, before going on to establish careers in academia and elsewhere.

If you are a current PhD researcher and want to add or update your profile, visit the Profile Editor or email alistair.brown@durham.ac.uk.

I started my PhD in 2013 under the supervision of world leading theorist and specialist in postmodernist and feminist literature, Professor Patricia Waugh.

My PhD investigates theories of authorship – the historical moment of the emergence of the concept of the death of the author in criticism which coincides with critics no longer seeing themselves as handmaids or explicators of the text, but instead seeing their relation to the text as one of creative rewriting in effect positioning themselves as rivals of creative writers. It explores the so-called ‘theory revolution’ that began to take shape in the 1960s with the writing of Roland Barthes, Jacques Derrida and Michel Foucault who questioned the foundations upon which the Anglo-American tradition rests. It studies the relation between solipsism and paranoia in that, in Pale Fire for example, authorship is part of the consequences of the projection of the writer’s own seemingly paranoid consciousness onto an external reality.

It also examines women writers’ engagement with the writings of Simone de Beauvoir’s critique of the eternal feminine, how writing the female body under patriarchy drives women mad and how this madness functions to give them authority over their narrative and life. It explores how the condition of the women writers, as in the case of Doris Lessing’s The Golden Notebook, is similar to that of R. D. Laing’s schizoid or schizophrenic. The research suggests that the rendition of madness is the gateway to new agency in the feminist discourses of Ecriture feminine and the vexed question of ‘writing the body’ that took centre stage in the new feminism of the 1980s.

At the moment I am a co-editor of the Durham University Postgraduate English journal and a reviewer of the Durham English Review: An Undergraduate Journal. I have presented talks in conferences and lecture series including ‘Authorship and Hysterical Woman in Muriel Spark’s The Driver’s Seat’ in Late Summer Lecture Series at Durham University, ‘Dying into Art: the Myth of the Author and the Woman Writer in the 1960s’ at 50 Years of Sexism: What is Next? at Durham University, ‘The Madwoman Leaves the Attic: the case of Sylvia Plath’ at 60th Annual Conference of the British Association for American Studies at Northumbria University, ‘Finding an Authorial Voice: Lessing’s The Golden Notebook and Laing’s The Divided Self’ as Work in Progress Talks at the Department of English Studies, Durham. I have co-convened a one-day conference titled ‘Is a Novel JUST a Novel’ at Durham University.

Listen to This: Sound Film and the Late Modernist Novel in Britain, 1929-1949

‘My Road to Freedom and Knowledge’: Louis MacNeice’s Self-Conscious Art

Virginia Woolf and Ecstasy: Feeling Beside Oneself to Touch the Thing Itself

HARRIS, ANGELA,CATHERINE (2019) Virginia Woolf and Ecstasy: Feeling Beside Oneself to Touch the Thing Itself. Doctoral thesis, Durham University.

(20 Sep 2019) » Virginia Woolf and Ecstasy: Feeling Beside Oneself to Touch the Thing Itself

‘To Keep Alive the Heart in the Head’: Versions of Transcendence in Samuel Taylor Coleridge’s Poetry 1796-1817

Another Kind of Light: A Loving Attention in Modern British and Irish Fiction

(14 Aug 2019) » Another Kind of Light: A Loving Attention in Modern British and Irish Fiction

We are a leading centre for undergraduate teaching, and host a thriving community of postgraduate scholars, literary critics, and interdisciplinary researchers. 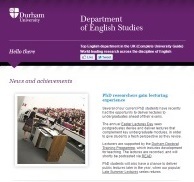