Burial of CO2 as a fluid deep within the earth will assist humankind curb emissions of greenhouse gases and help us transition to a future in which renewable and other low-carbon energies meet our needs. As with any waste disposal process, monitoring to ensure sites are safe is a critical component. The current preferred technology for monitoring CO2 disposal sites is to repeatedly acquire 3D seismic data from which we can interpret changes in the properties of the rock and fluid in the deep subsurface as indicators of the distribution of injected CO2. The process is episodic and very expensive – a single site could cost several million pounds per annum to monitor. Muon tomography offers an alternative which is both continuous and potentially much less expensive. Muons, sub-atomic particles, are produced continuously and naturally in the earth’s upper atmosphere, and there is a constant flow of them to the Earth’s surface. They are harmless to humans but nevertheless can be detected in deep mines (>1.5km). The number of muons detected at such depths is controlled by the density and thickness of the material through which they pass. When CO2 is injected deep below the earth’s surface it changes the bulk density of the rock within which it lies. These changes can be monitored and used to ensure injection sites remain safe.

In the Durham-led research consortium Geoscientists, particle physicists and engineers will work together to examine the potential of using the detection of cosmic ray muons to map the density profile of the material above the detectors and hence measure on-going levels of CO2 in any potential carbon store. Muon tomography offers the chance to develop a much cheaper, continuous and passive monitoring system for deep sub-surface storage sites.

Carbon storage could play a major part of UK and global environmental policies to tackle global warming but still allow us to generate clean, affordable energy. The muon tomography technology being developed could reduce the cost of the process and make carbon storage a more viable option.

The Department of Energy & Climate Change (DECC) is providing £647,000 for the monitoring project alongside matched funding from industry and the devices developed will be tested deep underground at the Science and Technology Facilities Council (STFC) research laboratory at Boulby mine on the edge of the North Yorkshire moors.

13 September 2013, BBC News 'Carbon capture and storage to be monitored by cosmic rays'

BBC News discusses the promising potential of a technology being developed at Durham University to use cosmic rays to monitor CO2 storage sites. The DEI’s Professor Jon Gluyas gave a talk at the British Science Festival last week explaining how Muon tomography could be used as a much cheaper and more reliable method for monitoring deep carbon repositories used in Carbon Capture and Storage. 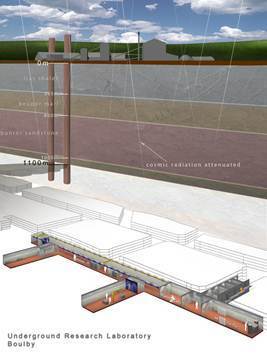